Kicking off the holiday season, Yoko Ono has posted a new message on a page of the official John Lennon website focused on John and Yoko's "War is Over!" peace campaign.

The page includes a video of vintage interview footage along with downloadable "War is Over!" signs in numerous languages.


The WAR IS OVER! campaign was once a tiny seed, which spread and covered the Earth.
John and I believed it helped many people to stop their wars. Since then, every WAR IS OVER! campaign has impacted the world as powerfully as the first one.
Start yours tomorrow, and you will see that it spreads and covers the world very fast and, meanwhile, makes you a Small Pebble Person.
Small Pebble People are people who know that small pebbles, when they’re dropped in the ocean, will immediately affect the ocean of the whole wide world.
Don’t throw a big stone. It scares people and creates repercussions.
Just drop a small pebble.
We’ll keep doing it. Together.
That’s how the world gets changed…by Small Pebble People.
We change, and the world changes.
Happy Holidays.
I love you! 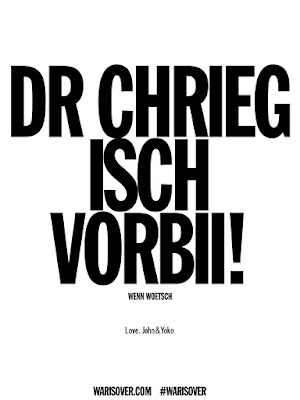 Email ThisBlogThis!Share to TwitterShare to FacebookShare to Pinterest
Labels: Activism, War is Over!