Review: "The Beatles Live at the Hollywood Bowl" 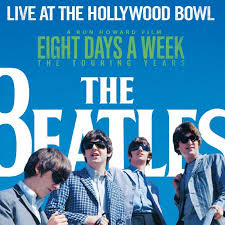 Beatles fans have waited many years for the group's 1977 compilation of Hollywood Bowl recordings to arrive on CD. And now, with the CD era over or nearly so, here it is. Better late than never.

The new version — also available via streaming and download and, soon, vinyl — has a new name, Live at the Hollywood rather than just At the Hollywood Bowl, along with new packaging.

The new cover, which many fans have been complaining about, ties into Ron Howard's documentary film "Eight Days a Week - The Touring Years," which debuts in select theaters and on Hulu later this week. Personally, I like the poster for "Eight Days a Week," which features a nice color shot of the Fabs circa 1965, but I think it's too type heavy and cluttered when shrunk down to CD size.

Also, linking the album to the film misleadingly gives the impression that this is a wide-ranging collection of Beatles live tracks, not just songs recorded in one venue during the band's 1964 and 1965 U.S. tours.

An appropriate soundtrack to the film would include live recordings from the group's pre-1964 years and from 1966, the Beatles' final year of touring. People, especially Americans, forget that the Beatles became national stars in Britain in 1963 and played dates in Sweden and France before ever visiting the United States. Yet producer Giles Martin (son of George), who oversaw the release of the new album and music restoration for Howard's film, has indicated no such collection is forthcoming.

On the plus side, however, this new collection does feature better sound than the 1977 version. It's reportedly sourced from higher-quality tapes, and Martin and his engineers have used new technology to turn down the still-present jet-engine screams of the fans while boosting the sound of the band.

For the most part, this has worked well. There's great clarity to the vocals and Ringo's drums. Yet, too my ears, the bass is now too loud, overpowering the sound of John and George's guitars and becoming a distraction. The lead guitar, from both the 1964 and 1965 recordings, is too low in the mix.

And generally, to my ears, there's a heavily processed feel to the album. Reverb has been added to the vocals and it sounds tinkered with overall. I enjoy being able to hear the Beatles better, but somehow the sound here doesn't seem quite "real."

Still, the performances are the for the most part great. There's a frenetic energy to the entire set. This isn't a modern-day concert, with extended stage patter and a range of tempos. Nearly every song here is played fast and almost all are rockers.

On some songs, such as "Help!" and "Things We Said Today," John and Paul sound out of breath. There's a sense that the band is trying to get through this as fast as possible, yet still providing a great performance. Knowing that they could be torn to shreds by overzealous fans in a heartbeat was no doubt a contributing factor. As much fun as the Beatles were having on stage, they were also likely nervous and scared for their own safety. It's remarkable that the group's lead vocals, harmonies and George's guitar solos (what you can hear of them) are so tuneful and polished in the face of all that screaming and hysteria.

However, I have to disagree with David Fricke, who raves about the group's performance of "Things We Said Today" in his liner notes as being a high point of the set. To me, it's the weakest track. The performance sounds tentative and sloppy and Paul's vocals on the verses are slurred and rushed. The choruses, however, I agree, are powerful and engaging.

After Paul's announcement before "Long Tall Sally" that the group is playing its last song, the album concludes with four tacked-on bonus cuts. I'm glad these are included, but their placement at the end spoils the illusion that this album is all one concert set. I wish Martin had slotted them in among the other songs instead. And concluding with "Baby's in Black," the slowest song on the entire album, makes no sense at all.

Still, despite numerous flaws, this is an important document and the only official live recording in the Beatles' catalog. No matter what its form, it's good to have the album readily available again.

Email ThisBlogThis!Share to TwitterShare to FacebookShare to Pinterest
Labels: Live at the Hollywood Bowl (album), Reviews