Mojo magazine quizzes Paul and Ringo about the Beatles' live performance years in its new issue, out Aug. 23 in the U.K.

The cover feature is a tie-in to the new Ron Howard's upcoming documentary, "The Beatles: Eight Days a Week - The Touring Years." 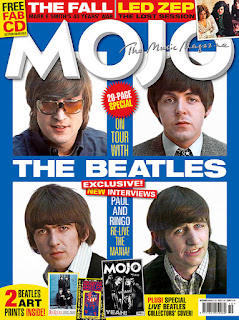 Of note is a discussion between the two Beatles about how the decision to stop touring in 1966 wasn't a de facto done deal.

“The rooftop gig [atop Apple headquarters at 3 Savile Row, London, on January 30, 1969] showed that we could still do that stuff. And we could maybe have gone out live again. It didn’t happen. But it was never like, Oh, that’s dead, the Beatles are dead. It was always a possibility that we would do it again. (to Paul) and you, in fact, tried one time to get us to go out again, didn’t you?”

“But you didn’t listen to me!” replies McCartney in mock outrage.

“I listened,” rejoinders Ringo. “It was the others!”

Yoko Ono and Olivia Harrison are also asked to recall their experiences watching the Beatles perform.

The interviews are part of a 20-page examination of the live years, new film and reissue of the Beatles' Hollywood Bowl live recordings. There's also a companion CD featuring the original versions of 15 rockers the Beatles performed during their Hamburg stints.