on July 15, 2016
A "psychedelic eye" mosaic that once graced the bottom of John Lennon's swimming pool has been restored and will be displayed in an upcoming museum display in London, the Kenwood blog reports. 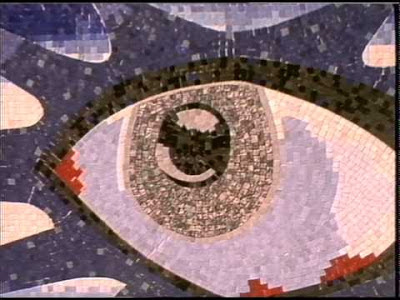 Barry Tashian of Barry and the Remains recalls touring with the Beatles in 1966.


“I remember after the Toronto show, I went to George Harrison’s room and hung out with him for a while,” Tashian said. “I saw my first-ever cassette player that night; he played me Ravi Shankar. I also left my sunglasses in his room, and we got up early the next day, and I saw The Beatles arriving at the gig. I noticed that George was walking up the steps into the plane and came up the aisle, and he had on two pairs of sunglasses. I thought, ‘Wow, cool, he wore my sunglasses.’”

Harrison was visiting his sister, Louise, who lived in Benton and ended up sitting in with McCarty's band, the Four Vests, while visiting the local VFW outpost.

The former Pigman Ranch in Missouri, where the Beatles spent a couple days relaxing during their 1964 U.S. tour is auctioning off a few items of Fab-related memorabilia ahead of the site becoming a state park.


Items for sale include household furniture and appliances in place when the Beatles visited the property for three days in September 1964: an antique fridge, antique chairs, original windows from the main house, an old green lamp, a yard swing, an old lantern, old doors, and occasional chairs.

The ranch was owned by the pilot of the Beatles' private plane for the tour, Reed Pigman. Several photos of the Beatles at the ranch ended up on the back cover of the band's Rubber Soul LP.

Pigman, meanwhile, suffered a cardiac event and crashed his plane in 1966. He and 82 of 98 other people on board the flight died as a result of the accident

Love, Love, Love: Various members of the Beatles clan are in Las Vegas this weekend celebrating the 10th anniversary - and re-vamping with new music and production pieces - of the "Beatles Love" show by Cirque de Soleil. Lots of media coverage, as you might expect, including this Guardian interview with Giles Martin, who created the mash-up music for the show with his late father, Beatles producer George Martin and two pieces from Variety: One on the show's makeover and another on the cast members.

Meanwhile, Sean Lennon tweeted this to prove he'd arrived in Sin City for the show.

And, based on the decor, it looks like Ringo's there, too:

Paul McCartney posed with Pennsylvania Highway Patrol officers during his tour stop in Philadelphia this week. 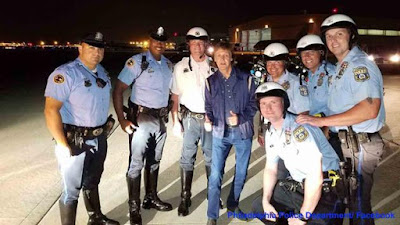 
"We bought a four-story building on Mathew Street between the Cavern Club and the Hard Day's Night Hotel," he said. The building faces the Cavern Club "so our position I think is pretty wonderful."

...The building will have displays of Beatles history going up through 1970 with memorabilia he inherited from his mother, Mona Best ("who was a hoarder") and from his father, Neil Aspinall (whose link to the Beatles should be known to anyone reading this) and stuff he has collected himself over a 30-year span. (Pete is not involved.)

An Australian man who pelted the Beatles with eggs when they visited that nation in 1964 is now a politician - and an eccentric one at that:


Mr Katter, a champion of Queensland farmers, has some unconventional views. He once claimed there were no homosexuals among his voters, promising to walk “backwards from Bourke to Brisbane” if any could be found.

He has called for the culling of bats because they carry so many diseases that they amount to the “greatest possible danger to human life”.