It's thick, heavy and billed as "The Life," but possibly the most surprising thing about Philip Norman's new biography of Paul McCartney is its author.

For years, Norman has been considered "anti-Paul" - critical in the extreme of Macca's talents and musical output while crediting John Lennon as the brightest, edgiest and most influential Beatle.

In fact, Norman's bestselling 1981 biography of the Beatles, "Shout!", was so Lennon-centric and critical of Paul that McCartney himself reportedly took to calling it "Shite!" 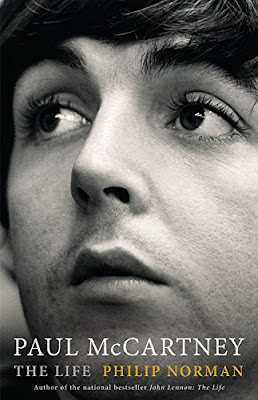 The author's evident dislike for McCartney, meanwhile, stretched from both before and after publication of "Shout!

In the early 1970s, Norman published a poem that referenced Paul's "unmusical spouse" Linda and his songs full of "cliches and cloy."

And, in 2003, Norman wrote a disapproving "open letter" to Paul in the Daily Mail, chastising him for lashing out at a photographer during the depths of his too-public breakup with Heather Mills and calling him a "ruthless perfectionist and autocrat" while also taking the time to knock Macca's dyed hair, "not very good" paintings and "at best mediocre" poetry.

While some of us may generally share in these assessments of Paul's post-Beatles career, Norman takes his criticism to a personal extreme, judging McCartney not just as a songwriter and performer, but as a human.

It's an odd and extreme case of a grown man choosing a "favorite Beatle." Or, more accurately, a "least favorite" one.

The strangest thing about it all is that, as Norman details in this new book, he met Paul only once before writing about him - early on during the Beatles years. And that meeting was both brief and friendly. Norman was a young reporter nervous about talking to the band. Paul provided some good quotes, let Norman try out his Hofner bass, and that was that. The reasons for all the animus that followed remain a mystery.

So, yes, Philip Norman writing a book about Paul McCartney is surprising. Even more so, is that's it's not a complete hatchet job. However, it's also not very revelatory.

Despite the jacket copy that promises a book that reveals unknown truths about a "long misunderstood genius," those of us who have followed Paul's career could easily paint the same portrait Norman provides:

McCartney is a brilliantly talented musician and crafter of melodies. He came from humble Liverpool beginnings and became one of the most successful, and richest, artists in history. He's written a list of classic songs longer than both his arms. Yet he still worries over his legacy, and about being overshadowed, even in death, by John Lennon. Where John often gets credit for being the "weird and experimental" Beatle, Paul messed around with tape loops first. He's capable of great work, but can't seem to self-edit, which often leads him to releasing work that should've been better.  He smoked a lot of weed, yet is apparently a husband and father worthy of admiration. He loves being on stage and is a born performer.

Norman details this and appears surprised by it all. It's the author here who seems to be learning about Paul McCartney, not the reader.

Amazingly, despite his fractious history with the author, Paul gave permission to friends, family members and associates to speak freely to Norman if they wished. Yet, new insights and details are few and far between.

Things that stick out are some new details about Paul's growing-up years in Liverpool, which come from his brother Mike and others; his early years in London living with Jane Asher's family, detailed by Jane's brother Peter (of Peter and Gordon fame), and a relatively sympathetic portrayal of Linda McCartney detailed by some of her close friends and her brother, John Eastman.

Norman also presents details shared by Paul's "secret girlfriend," Maggie McGivern, who carried on an affair with McCartney while he dated Jane Asher.

But there are huge swaths of the book that are more summary than substance. Norman doesn't write much at all about Paul's music but merely rattles off song titles and album names without critique or analysis. If Paul's life isn't about music, what is it about?

When the author does pause for exploration, it's usually to kick up some dirt or stir up some controversy. Norman foreshadows and details Paul's 1979 drugs bust in Japan as if it's the seminal event of his life - not just an idiotic mistake. And Heather Mills gets more attention than Sgt. Pepper, Abbey Road and Band on the Run combined.

Strangely, given Norman's esteem for Lennon, John comes across here as a bit player. The author seems unable to focus his attention on more than one Beatle at a time. Yes, this book is about Paul, but you can't tell his story without detailing John's, and vice versa. Norman also seemingly always needs a Beatle to pick on and, in this book, it's George Harrison, who he dismisses as a humorless mystic. Ringo Starr barely gets mentioned.

As in "Shout!" Norman's focus on the negative and unseemly manages to sap all the excitement, energy and joy from the Beatles' and Paul's stories. Younger readers, if there are any, may be left wondering why these guys appealed to anyone at all.

There are also little, silly, mistakes throughout. Norman perpetuates the "Cunard Yanks Myth" - the notion that the Beatles were influenced by American records brought home by Liverpool sailors, which has been disputed by Paul himself. Plenty of American songs were pressed on records by English labels and readily available. Norman says Brian Epstein's assistant Alistair Taylor made a visit to the Cavern at Brian's request before Epstein chose to go himself. That doesn't square with other accounts. Norman also says the Beatles' live sets, once they became famous, were so short they only included six or seven songs. The sets were short, but not that short. Generally, fans could count on at least 10 or 11 tunes, and generally in shows that also featured three of four other bands playing before the Beatles took the stage.

And, in writing about Paul's first solo album, Norman says Paul's intention was to create a record so simple and homespun that it would include "no tricksy editing, overdubbing or post-production." Yet, the album was all about overdubbing. Featuring Paul playing every instrument, the record couldn't have been made without it.

Despite his errant focus and lack of homework, Norman is a polished wordsmith. I love his phrase "souffle speak" to describe Paul's pleasant but unrevealing way of charming his way through interviews.

From a historical perspective, there's some good, new material here from John Eastman about the Beatles' breakup. He and his father, Lee, both music business attorneys, were hired by Paul to go to war against Allen Klein, the manager the rest of the Beatles favored. But, apart from that, it's of little use to researchers.

Norman doesn't provide any foot- or end notes, so it's presumed that all the quotes come from interviews he performed. However, that's not always the case. There are many quotes from Paul, for example, that are from interviews performed by others, yet the sources and dates aren't shared.

While it's billed as a definitive biography, this book isn't. Much of this material has been covered more engagingly, and with full participation from Paul, elsewhere.

There's the "Beatles Anthology," of course, but also Paul's memoir with author Barry Miles, "Many Years from Now," which covers his life from childhood through the end of the Beatle years, and Tom Doyle's recent, excellent, "Man on the Run," which focuses on Paul's life from the aftermath of the Beatles through his mid-1970s breakthrough as a solo star.

Despite it's heft, its subtitle and all the hype surrounding it, this is not "the life" of Paul McCartney, but just another view of it.