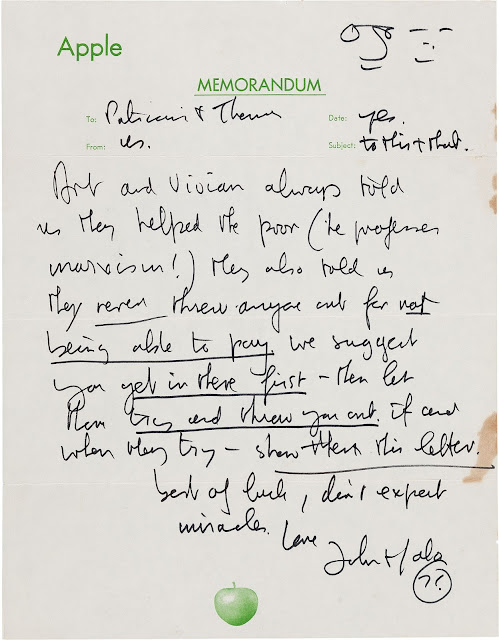 Incredible letter hand-scrawled in Lennon's quirky script, on Apple Memorandum letterhead (with hand-drawn doodles of John & Yoko in the upper right corner!), addressed to couple Patricia & Thomas. In 1971, after gaining inspiration from the book Primal Scream by Arthur Janov, the young couple wrote to Janov inquiring on the cost of the new form of therapy. They were dismayed at the astronomical amount given by Janov, and decided to write John Lennon, asking for his assistance, as they were also influenced by the Primal Scream therapy-inspired Plastic Ono Band album. Weeks later, they were pleasantly surprised to receive the rebellious former Beatle's response. The letter reads: "To: Patricia & Thomas, From: Us, Date: Yes, Subject: This & That. Art and Vivian always told us they helped the poor (he practices Marxism!) They also told us they never threw anyone out for not being able to pay. We suggest you get in there first - then let them try and throw you out. If and when they try - show them this letter. Best of luck, don't expect miracles. Love, John & Yoko. '71." With very few known pieces of memorabilia relating to Lennon's Primal Scream therapy, this is a must have rarity, a cherry on the sundae of of any Beatlemaniac/Lennon fan's collection! Measuring 8.5" x 11", it shows some toning from age, and spots of foxing on the right edge. With original envelope.
at February 11, 2016