Fans remember the Beatles at Shea, 50 years ago

The New York Daily News interviews a few fans who saw the Beatles play Shea Stadium 50 years ago, including Trea Hoving, who was just 9 at the time.


“I thought, ‘This is like meeting the Pope,’” she recalls. “This is going to be a holy vision.”

A nervous Hoving spent most of her audience with John, Paul, George and Ringo staring at the floor. “But Paul McCartney came over to me to make me less uncomfortable,” she says. “He had an envelope with a cartoon on it, which looked like a Blue Meanie.”

Then, she had her picture taken with John Lennon, who leaned down paternally.

“Believe it or not, it wasn’t a frenetic scene backstage at all,” Hoving says.
“Everyone was just milling around. It was very relaxed.” 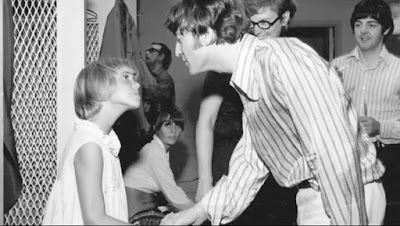