Director Ron Howard tells Rolling Stone about his in-production documentary focusing on the Beatles' live performances, which will use original footage from the band's concert performances.


"We are going to be able to take the Super 8 footage that we found, that was all shot silent. We'll not only be able to digitally repair a lot of that, but we've also been finding the original recordings," explains Howard. "We can now sync it up and create a concert experience so immersive and so engaging, I believe you're going to actually feel like you're somewhere in the Sixties, seeing what it was like to be there, feeling it and hearing it. And as a film director, that's a fantastic challenge."

...the team has already unearthed some surprising footage from the Beatles’ final concert at San Francisco's Candlestick Park in 1966.


"We got word that John Lennon wanted to come by and bring his son [Julian], and he was a big Fonzie fan. I managed to sneak in a picture," he recalls. "He was graciously cool, but mostly it was for his kid, which we all really appreciated."

Howard adds, chuckling, "A year or so later, Ringo and Keith Moon wandered by. I don't know what they were doing in the lot, and I'm not even sure they knew where they were, but they seemed happy to be there." 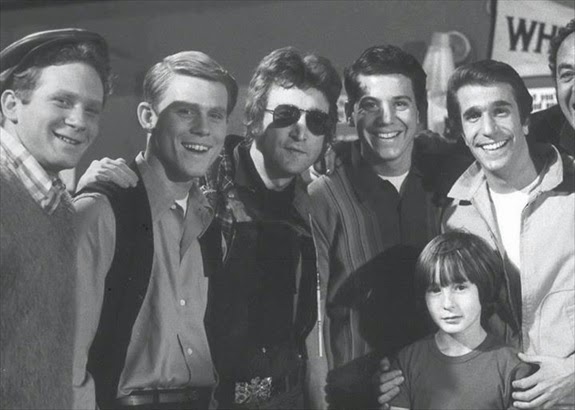