James L. Desper's "The Beatles - Tomorrow Never Knows" is billed as a biography, and does a dependable job charting the group's history from Liverpool basement to London rooftop and all stops in between.

But it's real strength, in my view, isn't in merely retelling the Beatles' story, but in acting as a sort of survey on what we know, and think we know, about the group.

A look at the bibliography shows that Desper has read deeply on the group. He makes use of this fact in the narrative, occasionally stopping to explore different accounts and theories in order to determine which are the most viable. In some cases, he provides his own theory or best guess, or acknowledges that, at this point, we're unlikely to ever learn the "truth" about various episodes. 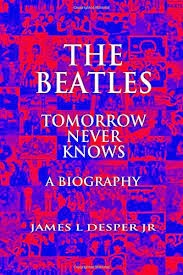 Examples of this include the clouded circumstances concerning original bassist Stu Sutcliffe's death - did a beating by thugs after an early Beatles' gig play a role? Did a beating at the hands of John Lennon - as has also been sensationally suggested - contribute? Did the traumatic "tug of war" between John Lennon's parents over his fate actually occur? When, exactly, did John invite Paul McCartney to join the Quarry Men? How did the Beatles get signed to EMI? Did the Beatles smoke pot in Buckingham Palace before getting their MBEs? Etc.

It's refreshing to see an author sift through the varied accounts instead of authoritatively passing along conjecture as fact.

Desper also is very good on discussing the songwriting collaboration, and non-collaboration, of Lennon and McCartney and the impact of LSD on the Beatles' work and outlook during the late 1960s.

That said, Desper occasionally falls into the same trap. He says some harsh things about George Martin and Brian Epstein without objectively offering up countering points of view. He also makes much about Paul's reported use of cocaine during the 1960s, suggesting that Paul used the drug frequently throughout much of the Beatles' recording career, which contributed to his lofty self-image and bossiness toward the others. This may be true, but I don't know how you verify it as fact.

Also, like most Beatles biographies, the book keeps the band in sort of a vacuum, not incorporating much information about the times they lived in or the other prominent musicians and musical trends of the 1960s. And, rather than focus mainly on primary materials such as original press coverage and contemporary interviews, most of the quotes come from existing Beatles books.

Still, Desper's book is more factually on-target and more objective than many books tackling the same territory. While many authors don't want to let fact get in the way of a good narrative,  Desper is willing to stop things in their tracks and look for the truth. He knows his subject, and what's been reported on it, intimately.

For longtime fans and newcomers alike, he's an excellent guide through the Beatles' history, particularly the more contentious bits.