Book review: "She Loves You" by Jude Southerland Kessler

I was initially skeptical of Jude Southerland Kessler's books, which use techniques of fiction to tell the story of John Lennon and the Beatles.

"What am I getting into? Fan fiction?"

But the series, now up to three entries, is nothing of the sort. 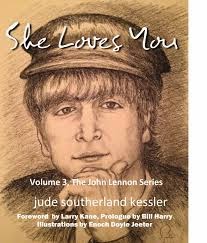 Southerland Kessler uses the phrase "narrative history" to describe her work. Unlike historical fiction, in which writers take liberties with fact, her books are firmly grounded in the truth.

The difference from a more typical history or biography, is that most of the facts are relayed via dialogue, much of which comes verbatim from interviews, memoirs and biographical texts.

Like a novelist, Southerland Kessler, sets scenes and creates conversations so her "characters" -- Lennon, his wife Cynthia, the other Beatles, manager Brian Epstein, etc. -- can relay historical information. But most of the words coming out of their mouths were actually said. Only occasionally does the author rely on conjecture. But she bases that, too, on deep research.

It's an approach that takes some getting used to. I found some of the dialogue clunky because it's so expository. But, in the course of reading this latest entry -- "She Loves You" -- I came to admire Southerland Kessler's thorough research and dedication to the truth.

The book begins just before the Beatles' triumphant performance on the "Sunday Night at the Palladium," which made them a household name in Britain, and ends right after their appearances on another Sunday night variety program, "The Ed Sullivan Show," which did the same trick for them in America.

In between, Southerland Kessler ably navigates some of the most clouded and controversial events of the Lennon/Beatles story, including Lennon's trip with Epstein to Spain and his brutal physical attack on Cavern Club emcee Bob Wooler at Paul McCartney's 21st birthday party in Liverpool.

What occurred in both of these events is still debated among Beatles writers and historians more than fifty years later, and Southerland Kessler takes the time to examine everything we know about what happened.

Her narrative approach also helps make the events more immediate and dramatic, but without venturing into rampant speculation. And it helps humanize her subjects. She paints an especially sympathetic portrait of Cynthia Lennon and she treats John with respect and admiration without glossing over his weaknesses and unfavorable characteristics.

The story of this transitional and eventful period of Lennon's life unfolds over nearly 800 pages of narrative, which is supplemented by pictures, a forward by Merseybeat editor Bill Harry, a series of lithographs by artist Enoch Doyle Jeter, several pages of photographs and a couple of appendices, which include an interview Southerland Kessler did with Bob Wooler in 1993.

There are also detailed notes after many of the chapters, in which the author  discusses her approach to researching and writing different points of the narrative, along with more than 3,200 footnotes.

The narrative history approach won't be everyone's cup of tea. I'm not sure it's really mine. But I came away deeply impressed by Southerland Kessler's scholarship and commitment to telling Lennon's story in such truth and detail.

I'm curious to see how she approaches the next stage of the Beatles' history and, ultimately, Lennon's post-Beatles life.

The Lennon series is available via Amazon and the author's website.
at January 21, 2015