Review: It Was Fifty Years Ago Today: The Beatles Invade America and Hollywood

on July 30, 2014
Harvey Kubernik is a veteran Los Angeles music writer, a contributor to Variety, Rolling Stone, Goldmine, Record Collector and the Melody Maker, as well as the author of several books about the Hollywood scene.

Over his career, he's interviewed many key figures and, naturally, the influence and impact of the Beatles has regularly come up in the course of  those conversations. In this book, Kubernik has assembled some of those reminiscences in tribute book timed for the 50th anniversary of the Beatles' arrival in America. 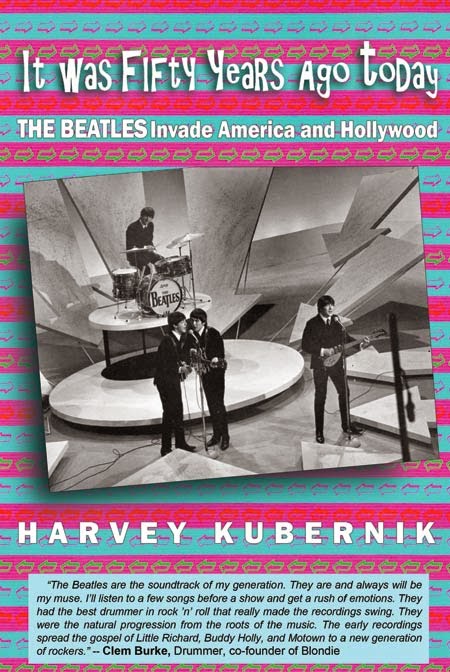 The text is largely made up of quotes from a diverse cast of characters ranging from Brian Wilson, Ravi Shankar, Roger McGuinn, Chris Hillman and Andrew Loog Oldham to lesser-known scenesters and even fans. Much of the focus is on Los Angeles and the Beatles' impact on and visits to the West Coast.But the Beatles' arrival in New York for the "Ed Sullivan Show"is discussed, along with, interestingly, the band's impact on Canada.

Toronto fan/historian Gary "Pig" Gold discusses how those north of the border heard the Beatles months ahead of the rest of the continent, thanks to the nation's still-close ties to its mother country. "Love Me Do" was aired in December 1962 on a radio program titled "Calling All Britons," while "Please Please Me" hit the Alberta Top 50 in April 1963.

There are interesting nuggets like this scattered throughout the book - along with all the usual talk about what a big deal the Beatles were when they arrived, and their lasting impact.

Kubernik mentions how when he interviewed Dick Clark he found the legendary TV producer's Burbank office decorated with rare Beatles memorabilia, including paintings by the group's original bassist, Stu Sutcliffe. The book recalls how, before the 1960 payola scandal forced him out of the record business, Clark was a partner in Swan Records, which, along with Vee-Jay, distributed the Beatles' music in the U.S. before Capitol got in the game, and he discusses the early, mixed, reaction the band's records received from kids on "American Bandstand."

In another interview, sixties teen Bill Mumy mentions how he missed out on a chance to see the Fabs at the Hollywood Bowl alongside his fellow "Lost in Space" co-star Angela Cartwright. But Kubernik interviews another fan who managed to meet the band in person. In early 1964, 16-year-old Charlene Nowak struck up a correspondence with George Harrison's mother, who arranged for Charlene to meet George and the rest of the band while they were staying in Bel-Air during their first American tour.

Singer and musicologist Ian Whitcomb, who hit the charts in 1965 with "You Turn Me On," offers some interesting observations on Lennon and McCartney's songwriting, suggesting that the duo wasn't the first of a new generation of songwriters, but the last of an older one - one that understood the structure and craft of Tin Pan Alley songwriting, all of which became a lost art as the 60s generation shifted from pop to the self-indulgent blues-based jamming of "rock."

We also hear from John Densmore, who mentions how he and the other members of the Doors (minus Jim Morrison), were students in the Maharishi Mahesh Yogi's second-ever Los Angeles course on Transcendental Meditation, held in 1965 - two full years before the Beatles ever got involved in the practice. The Maharishi's first batch of L.A. students reportedly included Clint Eastwood and new age music pioneer Paul Horn.

There's also some good detail on the Beatles' February 1964 Washington, D.C., concert, which was taped and shown later that summer in theaters alongside separately recorded performances by Leslie Gore and the Beach Boys. These screenings, held in more than 100 movie theaters nationwide, don't get discussed much these days. But, at the time, they provided thousands of fans with their second big dose of the Beatles after "Ed Sullivan."

Kubernik misses opportunities to delve into some of the more interesting L.A.-based events regarding the Beatles - their visits with Elvis, the Byrds, Jayne Mansfield and the acid-tripping Peter Fonda, for exampe --and the book can get a bit rambling due to the way it was assembled. However, it takes in some fascinating territory. Nostalgic fans should get a kick out of it, and Beatles-heads will read a few stories they haven't read before.

You can order the book from the publisher, Otherworld Industries, here.
Books Reviews