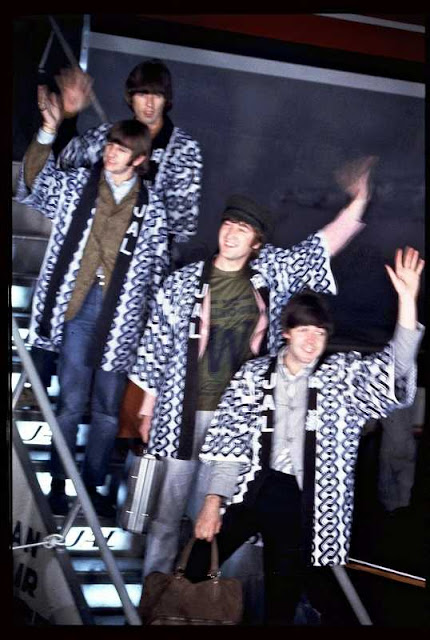 Via The Japan News:

Footage taken by police for security purposes during The Beatles’ tour of Japan in 1966 has been released — albeit somewhat censored — by a nonprofit organization advocating greater information disclosure.

The footage shows the extensive efforts taken by authorities to protect the world-famous band during a tour that had fans giddy with excitement but also sparked criticism that rock concerts were “inappropriate” for Nippon Budokan hall in Tokyo.

The Beatles touched down in Japan early on June 29, 1966, and performed five concerts over three days from June 30 to July 2 at the Budokan. More than 30,000 police officers were deployed to provide security during the tour.

The released black-and-white footage runs for 35 minutes 40 seconds and has no sound. It includes scenes of lines of uniformed police officers standing in the Budokan during one concert, and a discussion between officers and a man sitting in a sound truck adorned with a banner featuring messages, such as one denouncing the English band. Some previously unseen footage includes scenes that appear to be from the band’s concert on July 2.

“U.S. President John F. Kennedy had been assassinated about three years before the Beatles came to perform here,” said Toru Omura, an expert on the band’s visit to Japan. “This footage is a precious record that reveals the Metropolitan Police Department’s determination that they wouldn’t let any incidents occur during the tour.”

The existence of the footage was discovered in 2014. Although the Joho Kokai Shimin (Information disclosure citizens) Center had pressed the MPD to release the footage, parts showing the appearance of people other than the band members — such as security personnel and fans — were edited out due to privacy concerns.

The Nagoya-based center later took the Tokyo metropolitan government to court in a bid to get the entire footage released, but the Supreme Court upheld the center’s defeats in the lower courts. In July this year, a DVD of the footage was given to the center, with the faces of everyone except The Beatles blurred.

“This information belongs to the public, and it’s strange that only a few people could see this footage of The Beatles that would be cherished around the world,” said Satoshi Shinkai, a lawyer and chairman of the center. “This footage will be valuable in helping to raise awareness of the significance of disclosing information.”