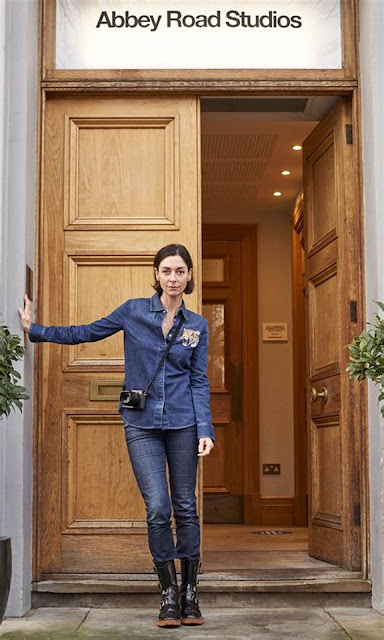 Variety has a review of "If These Walls Could Sing," a feature-length documentary directed by Paul McCartney's daughter Mary, which debuted at the Telluride Film Festival this week. The doc is set to stream on Disney+ at a later date.

McCartney starts her film off by showing a baby picture of herself at the studio, “taken by my mom, who was a photographer, and in a band with my dad.” That’s a coy cue for Paul McCartney to take it away with the shared memory of the family bringing her pony — named Jet! — to the studio around the time they were making “Band on the Run” in the early ’70s. It’s an irresistibly cute opening, even as you hope there won’t be a lot more family-movie moments.

There aren’t. Aside from a few fleeting bits of narration and an overheard question or two, she all but disappears from the movie, and also ensures some superstars who never bought her a horse get equal running time, from Pink Floyd (“Dark Side of the Moon” alone makes up a decent chunk of the film) to the late Fela Kuti. You know the doc is going to stay on a good, even track when the younger McCartney devotes a segment early on to Jacqueline du Pre, a cellist who was a classical music crossover superstar among the less swinging parts of London and the U.K. in the mid-1960s — setting up how Abbey Road might be most renowned in the 21st century less for its rock output than as an orchestral scoring stage for John Williams and other composing greats.

...But Disney Documentaries didn’t pick this film up because Williams figures prominently, but because they’ve done pretty well lately being in the Beatles business. “If These Walls Could Sing” has a decent amount of fun Fab moments to satisfy that craving (like Ringo Starr unexpectedly gushing over the White Album’s “Yer Blues,” which they finally went into a storage closet to record). Mary’s dad notices the old-timey-sounding piano that the Beatles borrowed in the mid-’60s from the novelty act Mrs. Mills, and sits down to play “Lady Madonna” on it. The filmmaker also brings in another expert witness, George Martin’s son, Giles Martin, to offer some of the most well-articulated thoughts on the band and the studio, knowing a good scion when she sees one.