"The Beatles: Get Back" Editor Discusses His Work on the Doc - Plus Helping Paul Duet with John on Tour 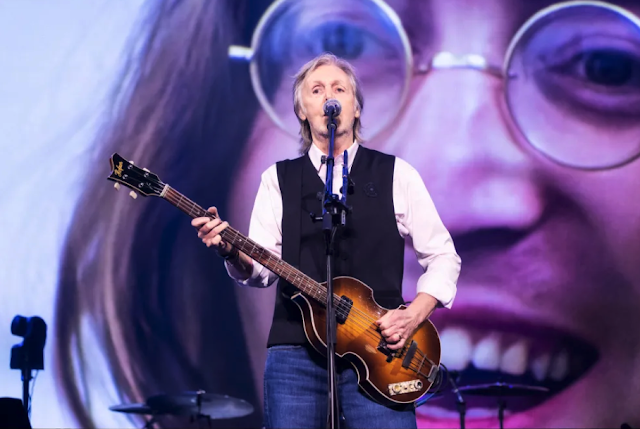 Below the Line has an interesting interview with film editor Jabez Olssen, who discusses his work on Peter Jackson's "The Beatles: Get Back" documentary.

BTL: Are there any particular sequences you wish you could have kept in the film?

Olssen: Well, there are other things that may, I’m sure — The Beatles or Apple Corps, which is their company — may release someday. There are other songs that they worked on. There’s a visit by one of their early managers, Allan Williams. There are a couple of other songs. There’s a version of Paul’s song, “There You Are, Eddie,” about his dog, where they improvise the names of all the different pets the Beatles have ever owned. They list them all as they improvise the song and that was pretty fun. There are other songs — a lot of improvised songs that were fun but didn’t make it in — ones where they list all their old friends from Liverpool. There are all sorts of things that were fun in their own right but just didn’t make the final cut.

...BTL: How does it feel to know that as recently as a few days ago, Paul McCartney was using footage from the documentary on his Got Back tour?

Olssen: We helped them with that and we put that together for him. That’s fantastic. We’ve been watching some clips on YouTube and it’s just amazing to see Paul being able to sing “I’ve Got A Feeling” with John Lennon. That was possible because of the machine learning and artificial intelligence software that had been developed down here by the team to clean up the audio. We had a lot of audio that was otherwise going to be unusable because there was no clarity to the dialogue. You couldn’t hear what was being said because of all the guitars playing over the top of it or tuning or background noise. This new software has been developed — this artificial intelligence software — that’s able to recognize the different Beatles voices and instruments and separate them out into their own standalone tracks, and thus we could get a lot more usable audio for the documentary. The same software is now being used for Paul’s concert to remove all the other Beatles off the audio so it’s only John Lennon live singing, and then that can be played on the screen behind Paul as he sings his part live. That’s just a thrill to see that it’s all come together and it’s working.

The Beatles Get Back (Peter Jackson film)