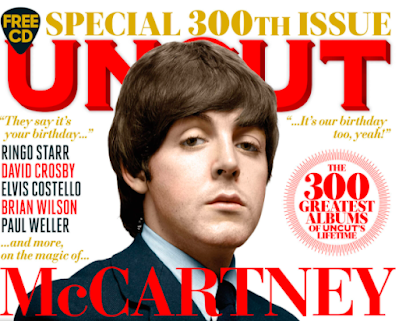 British mag Uncut is putting Paul McCartney on its cover in anticipation of his 80th birthday on June 18.

Inside are numerous tributes from friends and fans, some excerpted below:

A church hall in Woolton, Sunday afternoons at Forthlin Road, oatmeal jackets; “He always knew what he wanted…”

“He was trying to audition”

LEN GARRY, The Quarrymen: Paul and I got the number 80 bus home together from Liverpool Institute. I used to go round to his house on Forthlin Road, not far from where I lived. I played with The Quarrymen at the garden fête when Paul met John, on July 6, 1957. I remember Paul coming along that night at St Peter’s Church Hall, picking up a guitar – I didn’t even know he was left-handed – and playing a couple of chords. I think he was trying to audition for us.

John always wanted someone to support him, no matter what he did, and Paul came along at the right time. It wasn’t just about playing guitar together or singing, it was about composing as well. The last time I saw Paul was in 1963. Thirty years later, he phoned me up one Sunday afternoon. He asked how I was after John died. I told him I was absolutely devastated. There were no other words for how I felt. The fact that he called me up was a really nice touch. It was the same Paul I’d always known, no airs or graces.

COLIN HANTON, The Quarrymen: I first met Paul at St Peter’s, when he also met John. He played “Twenty Flight Rock” for John [as an audition], who was playing banjo chords on guitar at that time. [Guitarist] Eric Griffiths was quite keen for Paul to join us. He said to John: “He could teach us proper chords!” So Paul was invited in. He changed the dynamics of The Quarrymen. Paul decided that we should have some kind of uniform. Hence the photograph at the Wilson Hall in Garston, where he and John are wearing oatmeal jackets and the rest of us are wearing white shirts with bow ties. That was Paul, trying to make us look like a proper band.

We used to rehearse at Forthlin Road on Sunday afternoons. It was either George or Paul who found out that we could go into Percy Phillips’ studio and pay to make a record [July 12, 1958]. So we decided to do “That’ll Be The Day”, which was one of our live favourites, and Paul had written “In Spite Of All The Danger”. He got John Duff Lowe, his friend from school, to play honky-tonk piano. Paul was quite precise with him. He’d say to John: “No, no, I want you to do this…” He always knew what he wanted.

In which a false beard, a replacement bass player and a singalong around a pub piano figure highly; popular songs are written during a film shoot and over breakfast; Paul’s mid-’60s hair-washing secrets are revealed.

KLAUS VOORMANN: When The Beatles first came to Hamburg I was working as a commercial artist during the day, then I’d watch them at the Top Ten Club most nights. One time I got there long after midnight and the boys were still onstage, pretty knackered. They shouted over: “Come on Klaus, get up here!” Stuart [Sutcliffe] handed me his bass – I’d never even played one before – while Paul went over to the piano and started playing Fats Domino’s “I’m In Love Again”. He was such a great singer, even back then. He still plays those songs. When I recorded my solo album [2009’s A Sideman’s Journey], Paul remembered “I’m In Love Again” and suggested recording it, with him on piano and me using Stuart’s old bass guitar. At one point, I suggested he play a solo twice and he said, “You’re cheeky, Klaus. Are you the producer now?”

Another time, he played at the Königsplatz in Munich [2003] and invited me to the soundcheck. I walked in and stood way at the back, but Paul immediately saw me and waved. Then he whispered something to each band member, went over to the piano and started playing Ray Charles’ “Don’t Let The Sun Catch You Cryin’”. Whenever I went to the club in Hamburg I’d always ask them to play that one. So now he was doing it again, just for me. Isn’t that fantastic?