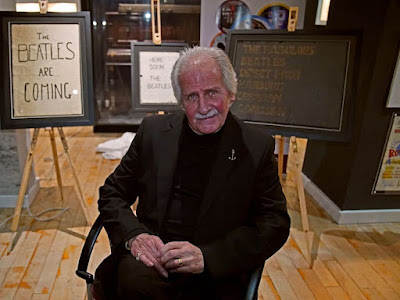 The Liverpool Beatles Museum, operated by Roag Best, brother to Pete and the son of Beatles' aide Neil  Aspinall is now displaying a selection of posters that Aspinall placed around Liverpool marking the band's return from performing in Hamburg in 1960.

Details from the Museum:

November 1960, and the Beatles were expecting to return to Liverpool to celebrate Christmas following their first trip to Hamburg.

Pete Best contacted Neil Aspinall and asked him to get some posters prepared for their return but not to tell anyone who the Beatles were. The idea was to tease the public, build up some mystique and thereby create some excitement.

Their return to Liverpool was unexpectedly brought forward for two reasons. George Harrison was discovered to be under 18 and subsequently headed home on 21st November 1960. Pete Best and Paul McCartney were deported ten days later for alleged arson. John Lennon remained in Hamburg for a while and Stuart Sutcliffe moved in with Astrid Kirchherr.

The poster “campaign” did work and when the Beatles performed their first Casbah Coffee Club post Hamburg shows in Liverpool they played to full houses and the seeds of Beatlemania were sown. Due to Neil’s publicity efforts many in the audience were convinced that The Beatles (direct from Hamburg) were a German band. This succeeded in tantalizing the fans even more.

The first poster uses the headline “The Beatles are Coming”. A slogan that was used again successfully in promoting the Beatles first USA tour in 1964. An idea of Neil’s?

The second poster with “Here Soon the Beatles”, reassures impatient Rock and Roll fans they will not have to wait much longer.

The third poster refers to “Fabulous Beatles Direct from Hamburg”. Fabulous Beatles eventually became distilled into the worldwide legend we recognize as the “Fab Four”.

Neil only created two of each and now for the first time the eyes of the world have a chance to see the only complete set of all three posters. They were revealed on 8.02.22 to an invited audience by none other than Pete Best himself and are now on display to the public at the one and only Liverpool Beatles Museum on Mathew Street, Liverpool.