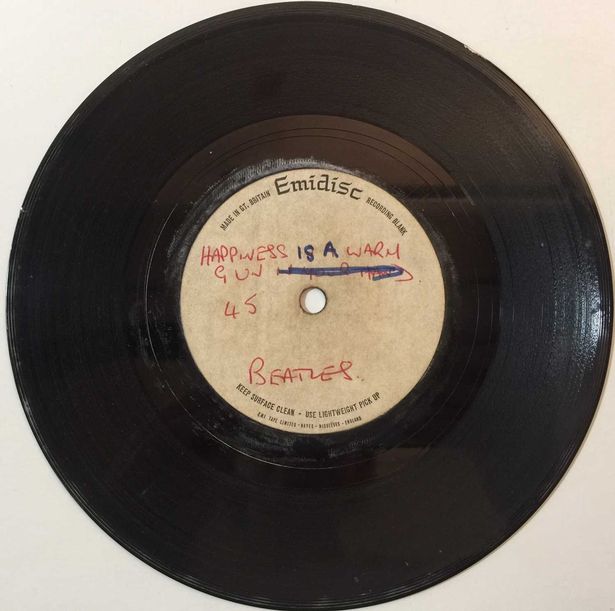 The Liverpool Echo has a report of a local man finding an acetate featuring an unreleased version of the Beatles' "Happiness is a Warm Gun" while clearing out his garage. The acetate is now up for sale via Omega Auctions.

According to the Echo:

Harry Plant bought the record in a box of old records at a car boot fair 40 years ago and didn't realize the 7ins acetate demo recording, that differs significantly to the final version used on the 1968 album, was in the box.

After he died in 2009 his son Derek was left with the records but he kept it in his garage.

It was only when he threw the box into his van to take it to landfill that he spotted it in the nick of time.

The acetate disc slipped out of the sleeve for a Ken Dodd and the Diddymen LP and fell onto his drive.

Derek put the acetate on his record player and discovered it was a different version of the song from the one released on the Beatles' "White Album."

A tuba thought to have been played by Paul McCartney is far more audible in the demo than on the final album version.

It also contains John Lennon singing 'I Need A Fix 'Cause I'm Going Down' twice in a row rather than just once in the final commercial release.

Its title was also different as the words '...In Your Hand' were not included in the album track.

Here is Omega's listing for the record:

THE BEATLES - HAPPINESS IS A WARM GUN (IN YOUR HAND) - ORIGINAL EMIDISC 7" ACETATE RECORDING. A quite wonderful piece of Beatles history with this original Emidisc 7" acetate of 'Happiness Is A Warm Gun In Your Hand' (the track shortly after being shortened to 'Happiness Is A Warm Gun'). One of only 2 known copies to be produced. The recording is pressed on a single-sided acetate record, the printed Emidisc labels with handwritten "Happiness Is A Warm Gun In Your Hand 45 Beatles' with 'In Your Hand' crossed out. This earlier take of the track contains a different mix of the final commercial release (noted with the Tuba more present in the mix) and also contains John Lennon singing 'I Need A Fix 'Cause I'm Going Down' twice in a row in the first bridge section rather than just once in the final commercial release. The record is in VG condition. Well-presented, there are some surface marks and scuffs with some light signs of wear to the metal lacquer. The record plays without any problems with only light surface noise and no skips/jumps. An insight into the fascinating recording history of this track and indeed the production of the acetates can be found in Mark Lewisohn's book 'The Complete Beatles Recording Sessions':

"Session date: 25th September 1968. A tuba that happened to be in the studio was overdubbed on this day, presumably played by Paul, although its presence is nearly indecipherable in the finished product. The enjoyable time they had performing these overdubs, understandably, were what caused John, George and Paul to all claim that this song was their favourite on the 'White Album'. By 5 am, the group left for the morning, satisfied that yet another track for the album was "in the can."

The lights in EMI Studios weren't exactly turned off quite yet though. Between 5 and 6:15 am, the engineering team of Thomas, Scott and Sheady worked at creating a usable mono mix of the song, two attempts being made during these early morning hours. These weren't deemed usable, however, but acetates were created of one of these mixes for The Beatles to hear, the acetate discs being labelled with what was still considered as the songs' title, “Happiness Is A Warm Gun In Your Hand.”

Paul was eager to play the acetate of this exciting new song to his recently acquired new girlfriend Linda Eastman (soon to be his Mrs.) who had just moved in with him at that time. However, it was decided that some of the overdubs needed tweaking which facilitated new mono mixes being created.

The same engineering team of Thomas, Scott and Sheady got to work on this later that same day in the control room of EMI Studio Two, starting at about 7 pm on September 26th, 1968. A decision was now made to shorten the title of the song to "Happiness Is A Warm Gun" since the documentation on this day reflects this change. The tuba was placed lower in the mix this time around, as was the organ overdub."