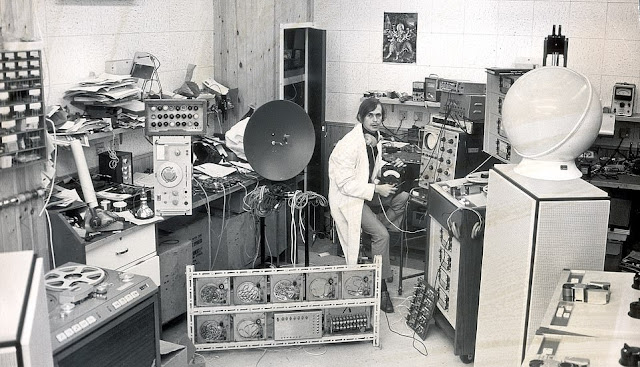 On the anniversary of his death, the Daily Mail recalls self-promoting "electronics genius" "Magic Alex" Madras and the fanciful inventions he promised to create for the Beatles when they hired him to run an electronics division as part of their Apple Corps company in the late 1960s. Many of his ideas never came to fruition, such as wallpaper that could amplify sound and the recording studio for he built the band that never worked, but, a few of them evidently did.

Colour-changing paint: Beatles guitarist George Harrison fondly remembered this invention, which had the capability of changing the colour of metal onto which it was painted.

The paint, which was initially blank and looked like a thick enamel, covered a thin piece of metal with two wires coming out of it.

When it was connected to a power source, it lit up a bright, luminous green, according to Harrison, who wanted to coat his Ferrari in it so it would light up whenever he pressed down on the brake pedal.

'We asked, "Can you do other colours too?" – "Sure, whatever you want",' Harrison remembered in an interview in the 1990s for The Beatles Anthology book.

'The back of the car would be red, but only when you stepped on the brake.

'The rest of the time the whole car would be connected to the revs on the gearbox – so the car would start off quite dull and as you shifted through the gears it would become brighter.

'You could go down the A3 and pass somebody and it would look like a flying saucer.'