Coming Up: "Dream Lovers: John and Yoko in NYC: The Photographs of Brian Hamill" 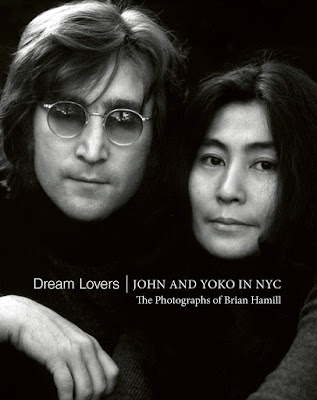 John Lennon's life, death and music shaped the world. His reputation as a philanthropist, political activist and pacifist influenced millions worldwide. If Elvis was King, Lennon was his rightful successor - and fittingly, several images in this collection of both classic and unseen photos show him wearing a diamond-studded 'Elvis' pin over his heart, in homage to his forefather on the throne of Rock 'n' Roll. John Lennon is seen here in several sessions in New York, performing on stage, relaxed at home and walking on the street with Yoko Ono.
Renowned celebrity photojournalist Brian Hamill delivers his own insider view of this Beatles icon, through intense, intimate photographic portraits and insightful essays. Whether Lennon is dominating the stage, posing against windswept cityscapes, or relaxing with Yoko Ono, Hamill's photography takes this quasi-mythical figure from the world of Rock 'n' Roll and shows him as the man he really was.