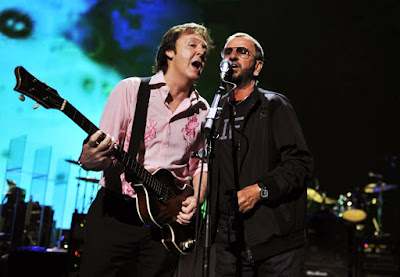 A recording of a a song co-written by Paul McCarney and Ringo Starr  is going up for bid later this month, the Daily Mail reports.

The tune, "Angel in Disguise," which Paul offered for Ringo's 1992 album, Time Takes Time, appears on a cassette demo tape owned by former Radio Luxembourg DJ Tony Prince, who is selling at auction.

According to Prince, he was invited to find another artist to record the track after Ringo decided not to use it.

The tape includes a rough version of Paul singing the tune and a band version with Ringo on vocals. The tape includes a demo for another song,  "Everyone Wins," which appeared as a B-side on the German single release of Ringo's "Don't Go Where the Road Don't Go" and, later, in a re-recorded version on his 2010 Y Not LP

A lead sheet for the song lists McCartney as sole composer, but Starr later added a verse the lyrics.

The tape will be up for bid at Omega Auctions’ online sale May 19, with 25 percent of donated to the National Health Service's Charities Together Covid-19 Urgent Appeal.