50 years ago today: The world learns the Beatles are no more 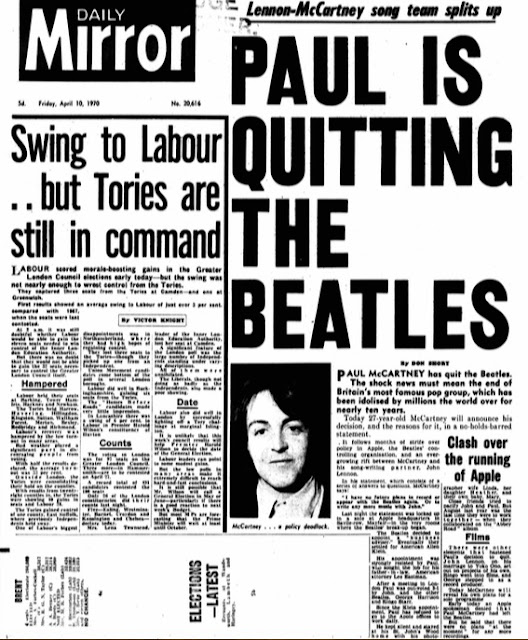 Fifty years ago today, most of the world learned that the Beatles were no more.

The band hadn't been active since late August 1969, but it took Paul announcing via a "self-interview" press release to promote his first solo album, McCartney, that he had no plans to work with the other Beatles again.

Daily Mirror show business writer Don Short says he was tipped to the release early and hence scooped the world that Paul was leaving the band.

Short has a new book out about his career and the Beatles are heavily featured. The Paul scoop is just one of many major stories he wrote about the band. In fact, he also wrote the first national article about the group—about John beating up Cavern Club emcee Bob Wooler—in 1962.

I interviewed Short for the upcoming issue of Beatlefan magazine, out next month, and I hope you'll check it out. You can order copies of the mag and subscribe here. 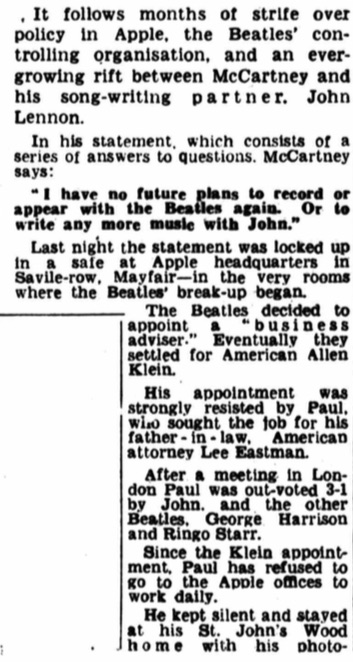 Here's fan reaction to the news:

And here is the text of Paul's self-interview: 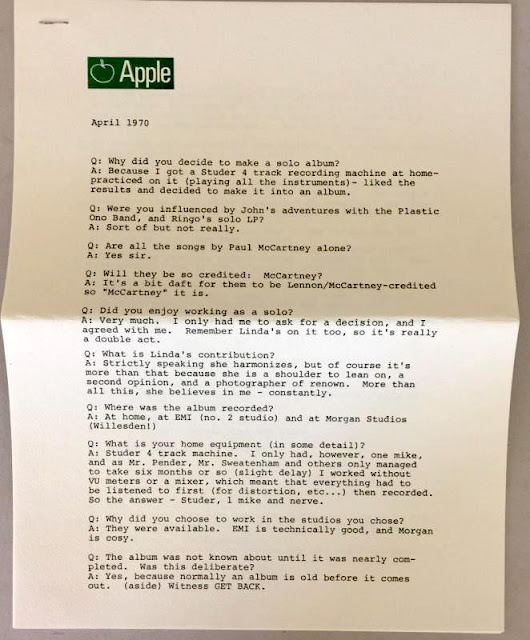 Q: "Why did you decide to make a solo album?"

PAUL: "Because I got a Studer four-track recording machine at home - practiced on it (playing all instruments) - liked the results, and decided to make it into an album."

Q: "Were you influenced by John's adventures with the Plastic Ono Band, and Ringo's solo LP?"

Q: "Are all songs by Paul McCartney alone?"

Q: "Will they be so credited: McCartney?"

PAUL: "It's a bit daft for them to be Lennon/McCartney credited, so 'McCartney' it is."

Q: "Did you enjoy working as a solo?"

PAUL: "Very much. I only had me to ask for a decision, and I agreed with me. Remember Linda's on it too, so it's really a double act."

Q: "What is Linda's contribution?"

PAUL: "Strictly speaking she harmonizes, but of course it's more than that because she's a shoulder to lean on, a second opinion, and a photographer of renown. More than all this, she believes in me - constantly."

Q: "Where was the album recorded?"

Q: "What is your home equipment (in some detail)?"

PAUL: "Studer four-track machine. I only had, however, one mike, and as Mr. Pender, Mr. Sweatenham and others only managed to take 6 months or so (slight delay) I worked without VU meters or a mixer, which meant that everything had to be listened to first (for distortion etc...) then recorded. So the answer - Studer, one mike, and nerve."

Q: "Why did you choose to work in the studios you chose?"

PAUL: "They were available. EMI is technically very good and Morgan is cozy."

Q: "The album was not known about until it was nearly completed. Was this deliberate?"

PAUL: "Yes, because normally an album is old before it even comes out. (A side) Witness 'Get Back.'"

PAUL: "I've always wanted to buy a Beatles album like people do and be as surprised as they must be. So this was the next best thing. Linda and I are the only two who will be sick of it by the release date. We love it really."

Q: "Are you able to describe the texture or the feel of the album in a few words?"

Q: "How long did it take to complete?"

PAUL: "From just before (I think) Xmas, until now. 'The Lovely Linda' was the first thing I recorded at home, and was originally to test the equipment. That was around Xmas."

Q: "Assuming all the songs are new to the public, how new are they to you? Are they recent"

Q: "Which instruments have you played on the album?"

Q: "Have you played all these instruments on earlier recordings?"

PAUL: "Yes, drums being the one that I normally wouldn't do."

Q: "Why did you do all the instruments yourself?"

Q: "Will Linda be heard on all future records?"

PAUL: "Could be. We love singing together and have plenty of opportunity for practice."

Q: "Will Paul and Linda become a John and Yoko?"

PAUL: "No, they will become Paul and Linda."

Q: "What has recording alone taught you?"

PAUL: "That to make your own decisions about what you do is easy, and playing with yourself is very difficult, but satisfying."

Q: "Who has done the artwork?"

PAUL: "Linda has taken all the photos, and she and I designed the package."

Q: "Is it true that neither Allen Klein nor ABKCO have been nor will be in any way involved with the production, manufacturing, distribution or promotion of this new album?"

Q: "Did you miss the other Beatles and George Martin? Was there a moment when you thought, 'I wish Ringo were here for this break?'"

Q: "Assuming this is a very big hit album, will you do another?"

Q: "Are you planning a new album or single with the Beatles?"

Q: "Is this album a rest away from the Beatles or the start of a solo career?"

PAUL: "Time will tell. Being a solo album means it's 'the start of a solo career...' and not being done with the Beatles means it's just a rest. So it's both."

Q: "Is your break with the Beatles temporary or permanent, due to personal differences or musical ones?"

Q: "Do you foresee a time when Lennon-McCartney becomes an active songwriting partnership again?"

Q: "What do you feel about John's peace effort? The Plastic Ono Band? Giving back the MBE? Yoko's influence? Yoko?"

PAUL: "I love John, and respect what he does - it doesn't really give me any pleasure."

Q: "Were any of the songs on the album originally written with the Beatles in mind?"

Q: "Were you pleased with 'Abbey Road'? Was it musically restricting?"

Q: "What is your relationship with Klein?"

PAUL: "It isn't. I am not in contact with him, and he does not represent me in ANY way."

Q: "What is your relationship with Apple?"

PAUL: "It is the office of a company which I part own with the other three Beatles. I don't go there because I don't like offices or business, especially when I am on holiday."

Q: "Have you any plans to set up an independent production company?"

Q: "What sort of music has influenced you on this album?"

Q: "Are you writing more prolifically now? Or less so?"

PAUL: "About the same. I have a queue waiting to be recorded."

Q: "What are your plans now? A holiday? A musical? A movie? Retirement?"

Email ThisBlogThis!Share to TwitterShare to FacebookShare to Pinterest
Labels: Breakup