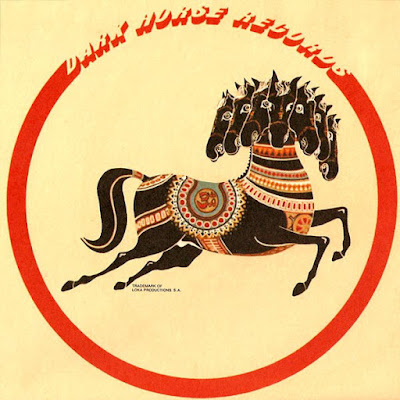 Dark Horse Records, the label George Harrison created to release music from himself and others in the early 1970s, is being revived.

Here's a news releasing outlining the label's plans. Weird to think about Joe Strummer albums coming out via Dark Horse!

BMG has announced a new multi-faceted global partnership with Dark Horse Records, the imprint led by Dhani Harrison and manager David Zonshine. The agreement initially brings releases from the acclaimed catalog of George Harrison’s legendary label Dark Horse Records and his Indian label imprint HariSongs, as well as Joe Strummer’s solo catalog, including his works alongside The Mescaleros.

Available Friday, January 24 on all digital platforms, the first slate of releases includes the George Harrison produced Ravi Shankar Chants of India, Ravi Shankar & Ali Akbar Khan In Concert 1972, Joe Strummer & The Mescaleros’ albums Rock Art and The X-Ray Style, Global A Go-Go, and Streetcore, and Attitudes – Ain't Love Enough: The Best of the Attitudes. Upcoming releases in 2020 include compilations, live albums, and box sets featuring rare and unreleased recordings from the Dark Horse label – many of which will be made available digitally for the first time ever.

Dhani Harrison, said, “It is with great pleasure and excitement that I can finally announce a new chapter for Dark Horse Records in the music industry alongside our friends at BMG. The label started by my father in 1974 has been a family business my whole life (and is indeed even the reason that my parents met.) From the Indian classical Ragas of Ravi Shankar to the Rock and Roll of ‘Attitudes’ I look forward to reintroducing, to a new audience, all of those artists that my father loved so much. We will also be expanding the Dark Horse family with new artists and classic catalogues in the coming years to include a rich and varied roster of incredible musicians whom we love. Please watch this space! With love, Dhani Harrison.”

The HariSongs label was created by the George Harrison Estate to celebrate the Indian classical music George loved and believed would “help as a balance towards a peaceful daily life.” The label was launched in April 2018 in honor of both Ravi Shankar’s birthday (April 7, 1920) and Ali Akbar Khan’s birthday (April 14, 1922).