Abbey Road - the classic LP that served as the Beatles' swan song and is rated by many fans as one of their best - wasn't a planned release.

At the start of 1969, the band was just beginning work on the project that would ultimately become the Let it Be album and film.

But rehearsal sessions at Twickenham Film Studios for a planned TV special to incorporate a live performance of some sort (band members couldn't agree on where, or if, to play in front of an audience) were tense and uninspiring. The big, empty soundstage where the band had set up was cold and uninviting.

The Beatles eventually moved to their own studio in the basement of their Apple office on Savoy Road, where sessions started to drift away from the "live," "no overdubs" rules they'd set for the "Let it Be"/"Get Back" project.

With plans for the the TV special were scrapped. It was agreed footage from the rehearsals and a performance on the Apple rooftop would be edited into film and that songs performed in the footage would be assembled into a soundtrack album; all of which would take time.

In the meanwhile, the band decided to make a separate, second album that would come out ahead of he soundtrack. This eventually became Abbey Road.

Over the next few days, we'll take a look at clippings from the Beatles Monthly Book, the band's official fan magazine, that chart the detours and changed planned that gave us Abbey Road. 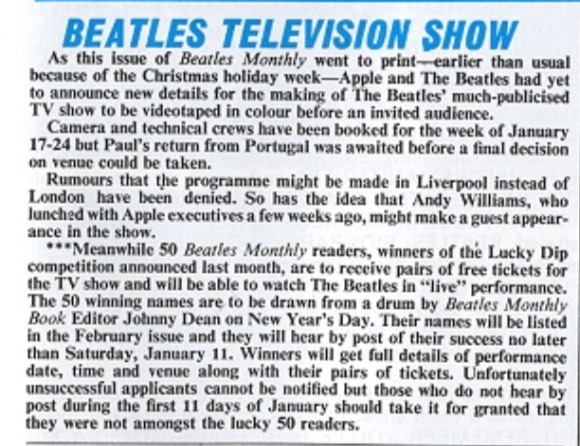