on February 03, 2019
Today is the 60th anniversary of the plane crash that killed Buddy Holly, along with singers Ritchie Valens and J.P. "The Big Bopper" Richardson.

Unless you seek it out, it's getting harder and harder to hear the music of Beatles influences, such as Holly, Little Richard, Chuck Berry and Elvis, as their music recedes further into history. Not much of it gets played on "oldies" radio, or gets featured on TV or in films. But it would be a shame to lose touch of how crucial this music was in influencing The Beatles and all the pop music that followed.

Holly, in particular, was a key influence on the band. He wrote much of his own music, and his songwriting craft, structures and melodies were instructive to John and Paul as they started writing their own tunes. One of the first things The Beatles, as the Quarry Men, put down ever recorded, was a rendition of Holly's "That'll Be the Day."
The Beatles went on to record a lovely version of  Holly's "Words of Love" for the Beatles For Sale album, and played "Crying, Wishing, Hoping" on their Decca audition and on the BBC. They covered other Holly-written or -associated tunes on their BBC recordings and during the "Get Back" sessions.

Also, lest we forget, The Beatles essentially named themselves in tribute of Holly's band, The Crickets.

In the letter below, responding to a questionnaire mailed to him in 1974 by an aspiring music journalist named Jim Dawson, John shares his love of Holly. Dawson, according to Hunter Davies' "The John Lennon Letters," was hoping to write an article on Holly for Rolling Stone and also sent the questionnaire to Paul and to Bob Dylan. Only John wrote back, using his then-new typewriter, of which he was an enthusiastic, if error-prone, user. 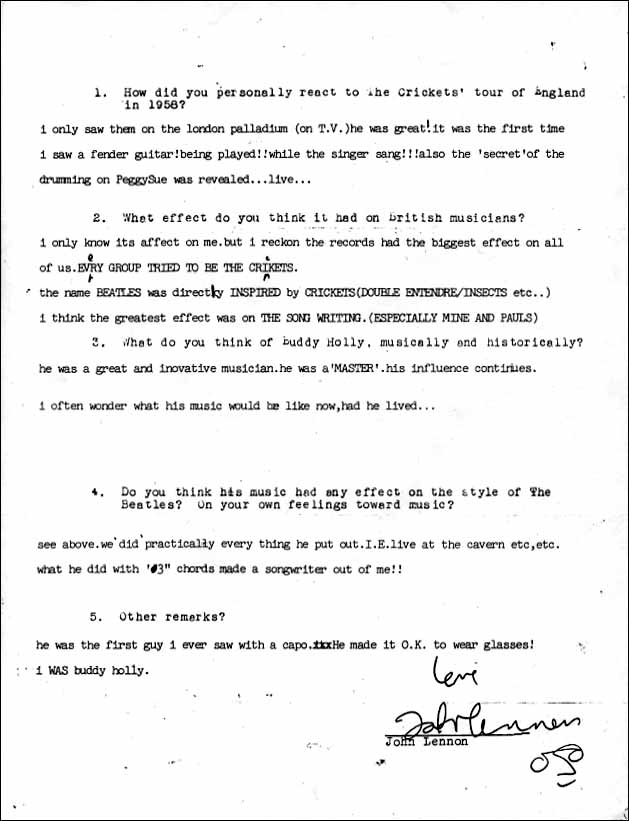 And here's the spectacular video of "Words of Love" put together to promotes The Beatles' second compilation of of Beeb recordings back in 2013.


There's apparently no surviving footage of Holly and The Crickets on "Live at the London Palladium," but here they are on "The Ed Sullivan Show" in 1957.