Unused gatefold art for Sgt. Pepper LP up for auction 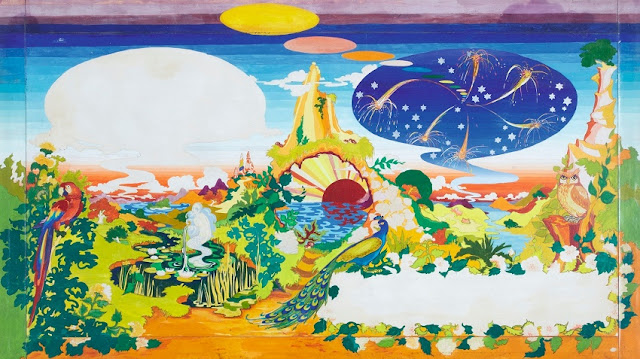 A painting by the Dutch art collective, the Fool, originally intended as gatefold art for the Sgt. Pepper album is up for auction at Sotheby's.

“…The Beatles’ roadie, Mal Evans, brought John and Paul to our studio in St Stephen’s Gardens,” said Marijke Koger, one of the founding members of the group.

“They had seen my Saville Theatre programme cover for Hendrix and The Who and were intrigued by the artwork. They blew their minds over the ‘Wonderwall’ Simon [Posthuma] and I had painted in 1966 on an armoire in polychrome psychedelic imagery, as well as others paintings and artwork.”
Having been introduced to LSD in 1965, the Beatles were becoming well-versed in psychedelic imagery, and they felt The Fool’s work captured the spirit of the age.

In return, the group created a vivid dreamscape filled with flowing water, towering mountains, green foliage and colourful birds such as parrots and peacocks, all surrounding a blazing sunset.

However, the style of the artwork didn’t sit well with Peter Blake’s cover, or the faux-Edwardian imagery McCartney had originally envisioned, and in the end the band rejected the painting.

Instead they decided to use a group photograph taken by Michael Cooper during the shoot for the cover.

The Fool continued its relationship with the Beatles, however, designing posters and clothes for the band's Apple Boutique and painting the huge psychedelic mural on the boutique's Baker Street storefront.

Interestingly, Ringo Starr purchased the unused gatefold art in the 1980s, later gifting it to his manager at the time, Hilary Gerrard in 1987. Ringo even signed the reverse side of the painting “To Hill | We Love you | Billy S.”, in reference to his Sgt. Pepper alter ego Billy Shears.

Sotheby's expects the unused "Pepper" artwork to fetch more than $100,000.