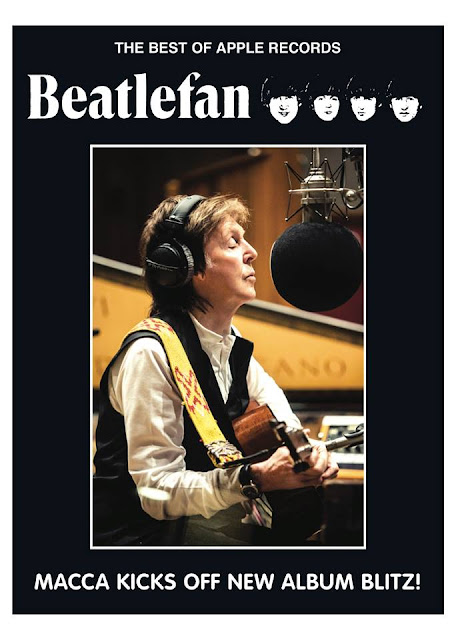 Items by yours truly include book reviews of Carol Tyler's graphic novel "Fab 4 Mania," and "Tom Murray's Mad Day Out" photo book, along with a feature titled "Waiting on the White Album," about news coverage regarding the Beatles and their work on the LP prior to its release in 1968.

Here's Bill's description of the issue and how to order a copy:

Beatlefan #233 celebrates the 50th anniversary of The Beatles’ “Hey Jude” and “Revolution” single and the launch of their Apple Records label, with articles by Bruce Spizer, Al Sussman, Bill King and John Firehammer. Included is my playlist of the Best of Apple, updated with an assist from Al, Brad Hundt and Allan Kozinn. Also in the new issue, marking our upcoming 40th birthday, we have more from the early years of Beatlefan. And Dave Hinchberger takes on a tour of The Beatles’ Liverpool, while Kit O’Toole traces the influence of the British music hall tradition on the band. Plus, we look at why Paul McCartney’s “Carpool Karaoke” had such a wide impact. And, we have all the latest news (including reports on Macca’s secret gigs in the U.K., Ringo’s tour and Paul’s upcoming album), and reviews of new recordings, books and more. For more information, email goodypress@gmail.com.
at August 24, 2018