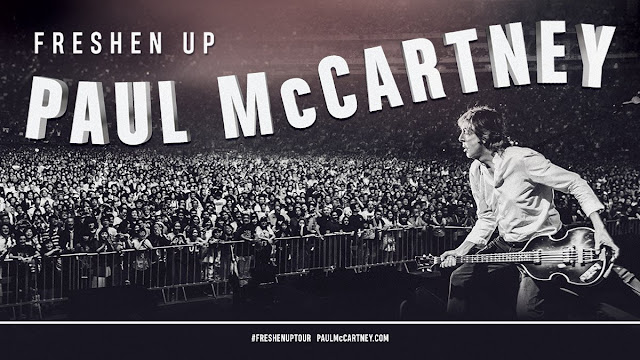 Paul McCartney is launching a new tour, with the announcement of four September dates in Canada.

Paul will make his eagerly anticipated return to the road with his new #FreshenUpTour. Four confirmed dates were announced this morning, marking Paul’s first series of live dates since the 'One On One' tour that played to some two million fans over the course of 2016 and 2017.

The 'Freshen Up' tour will also be Paul’s first outing following the release of his brand new studio album, Egypt Station, out September 7th on Capitol Records.
'Freshen Up' will begin September 17th at the Videotron Centre in Québec, Paul’s first show in the Canadian capital since his 2013 stop at the Plains of Abraham on the 'Out There' tour. From there, Paul will visit Montreal for the first time since the 'On The Run' tour in 2011 to play the Bell Centre on September 20th, before returning to Winnipeg September 28th to play Bell MTS Place, his first performance in the capital of Manitoba since 2013. 'Freshen Up's' Canadian itinerary will conclude with a visit to a final Canadian capital city, Edmonton, Alberta, for a September 30th show at Rogers Place—Paul’s first appearance in the city since 2012.

Here are the first dates: