Paul McCartney made news this week joining "Star Wars" creator George Lucas for lunch while on holiday in St. Barts. 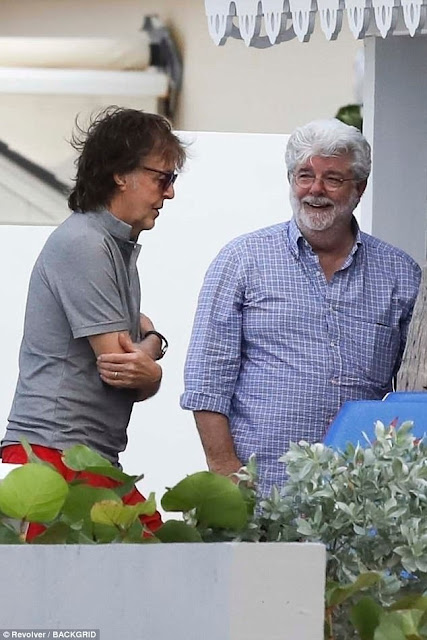 Ringo Starr was knighted earlier this week, making him the second Beatle after Paul McCartney to become a "sir." It's possible the both John Lennon and George Harrison could be knighted posthumously, but not likely because both Beatles rejected royal honors while alive, an article in Ultimate Classic Rock speculates.

John Lennon returned his M.B.E. award (given to all four Beatles in 1965) to the Queen in 1969 as a protest agains Britain's support of U.S. activity in Vietnam. George Harrison, meanwhile, turned down an O.B.E. award from the Queen in 2000.

A Honda trail bike once owned by John Lennon is up for auction.

The late Beatle‘s bike – a Honda Monkey-Trail Bike XUC 91H – was used by Lennon between 1969 to 1971 to get around his Tittenhurst Park estate in the Surrey countryside. Tony Calder, who promoted the release of the Beatles' debut single, "Love Me Do," died Jan. 2 at age 74, the Guardian reports.

Calder, who was born in Surrey, was hired by Beatles manager Brian Epstein to promote the band in the early 1960s. Soon after, Calder and Rolling Stones manager Andrew Loog Oldham – whom Calder had met while working at Decca Records – formed a PR company called Image. It managed the Rolling Stones and promoted the Beach Boys.

Paul McCartney and the Rolling Stones generated the most money of any live-performing musical act in 2017, Pollstar reports.