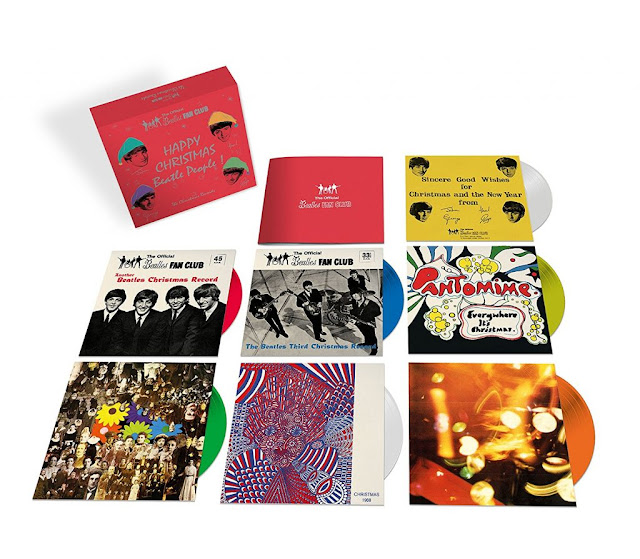 Gazing at all the Beatles-related stuff in my house, you may be surprised to learn that I'm not a Beatles collector.

Yes, I have all the band's releases in mono and stereo, and all of the U.S. releases. A lot of it I have on both vinyl and CD. And I have "A Hard Day's Night" and "Help!" on DVD and this year's Sgt. Pepper box. And loads of books and even a few Yellow Submarine toys.

But I don't feel compelled to own it all. Especially if I already own it!

I'm skipping, for example, the new Paul McCartney vinyl releases coming out soon. I have this music already. I don't need to buy these new versions just because they appear on the Capitol label rather than on Hear Music and are pressed on color, rather than plain black, vinyl.

Don't get me wrong. I welcome an official release of these recordings.

Just like everyone else, I have them on bootlegs, but would love to have them in better-quality sound with a nice booklet detailing their history.

But I'm not excited by the release package Apple has put together, which seems gimmicky and exploitative.

Rather than compiling the messages onto a single CD or vinyl LP, Apple is essentially creating replicas of the original flexi-disks that the Beatles sent out to their fans each holiday season between 1963 and 1970. Instead of flexis, though, the messages appear on vinyl 45s, one for each year. Each is pressed in a different shade of vinyl, with a cover that replicates the original fan club release. And it all comes in a nice box with a booklet.

It's an attractive package, but in my opinion that's mostly what it is: A package. Rather than seven colorful 45s, I'd rather have all this stuff on a single CD.

I know myself. And I know that if I buy this box of 45s, it will just sit on a shelf, looking nice but taking up space and collecting dust. A CD takes ups less room and I'd be more apt to play it occasionally, at least during the Christmas season.

In fact, I question whether some folks who buy this box will open it at all. After all, doing so will instantly devalue it as the collectors item Apple is trying to create.

By stating this is a limited edition, Apple is hinting that this is something that one day will be unavailable and rare. If you don't get it now, you may never have the chance.

But of what real value is it? It's a cardboard box filled with copies of records released in the 1960s. Fun to look at, but not the real deal. Even though I'm not a Beatles collector, I'd love to own an original "butcher" cover, just as a historical artifact. But buying a "butcher" cover printed last week doesn't excite me. I feel similarly about this set.

That said, if people want the box, let them enjoy it. But how about a $15 CD or $25 LP for those of us who don't need the packaging?

People didn't need to buy this summer's Sgt. Pepper box to get the new mix. It was available on CD and vinyl, along with selected outtakes included in the box. And the new mix is now being made available as a single vinyl LP. Options are nice and allow more people to hear the recordings.

I've seen suggestions from some fans/collectors online saying that, despite the $70 price tag, Apple is providing a treat to fans by creating this special box and limiting its release.

I've also seen the suggestion that the high price and exclusivity of the release is a good thing because it means so-called "casual fans" are less likely to buy it under the impression that its a conventional holiday album, with recordings of the Beatles singing Christmas carols. The worry is that these poor sods will get the record, hear the Beatles goofing off, and get annoyed or feel disappointed.

There's something odd and snobby about that attitude. I think that people who aren't obsessed with the Beatles are fully capable of reading some blurbs or reviews and deciding whether this is something for them or not. Surely all the rest of us were able to figure this out on our own, why can't others? "Casual fans" may even stand a better chance of understanding it all, seeing as how their minds are less clouded with Beatles trivia.

So, all that said, I'm left to face the $70 question. Should I buy the box? Put it on my Christmas list? Or wait in hope of the single CD or LP version I prefer?

After all, there's nothing saying that Apple won't put out a replica of the 1970 Beatles Christmas Album, which compiled all the messages onto one LP, next season. The completists will need to grab that one, too.
at November 14, 2017