Ringo's new LP, Give More Love, is set for Sept. 15. Details were announced today, which is Ringo's 77th birthday.

Interestingly, Paul doesn't feature on a track titled "Speed of Sound," while Peter Frampton, also featured on the album, doesn't appear on a song called "Show Me the Way," which Paul does appear on.

You can hear the title track here.

Here's a description and track listings. 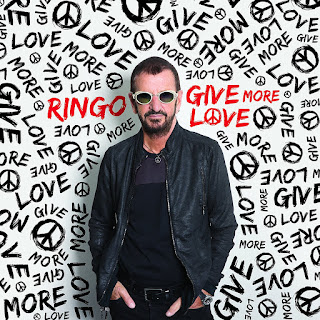 Ringo reveals details of his 19th solo album, Give More Love, which will be released 15th September 15, 2017.

Recorded at his home studio in Los Angeles, Give More Love has 10 new tracks featuring collaborations with friends including:

The CD edition will feature four bonus tracks, including presumably live and/or new versions of "You Can't Fight Lightning," "Photograph" and "Don't Pass Me By,"along with an original demo of "Back Off Boogaloo."

Email ThisBlogThis!Share to TwitterShare to FacebookShare to Pinterest
Labels: Give More Love