Lucky folks, not including me, got a chance to preview the upcoming Sgt. Pepper anniversary edition - outtakes and all - at Abbey Road yesterday. Those attending also got the chance to ask questions of Giles Martin, who created a new remix of the album as part of the package.


Rolling Stone pays special attention to the outtakes, noting 10 highlights, including John's raw vocal on the first take of "Lucy in the Sky with Diamonds," which is "a world away from the ethereal dreaminess of the final version" and the original hummed last chord of "A Day in the Life" ("They overdub the voices into a full choir humming the chord — but as Martin says, 'They realized it wasn't a very good ending.'")

Udiscovermusic, meanwhile, has high praise for the remix, which is stereo but takes the beloved-by-the-Beatles mono mix as its template:


‘Lucy In The Sky With Diamonds’ is beyond expansive – it’s immersive, up there in the firmament, where it belongs. Equally, George Harrison’s ‘Within You Without You’ buzzes into life, its synthesis of Eastern instrumentation and Western strings making more sense than ever, the percussion pulsing beneath as though the song is giving birth to itself. At the other end of the spectrum is ‘Being For The Benefit Of Mr Kite!’, brimful of colour: the aural equivalent of a big-top tent setting up inside your head and letting the entire circus tumble out.

And Super Deluxe Edition quotes Martin at length discussing the entire package, including why a couple of tracks recorded during the Pepper sessions weren't included:

Was Carnival of Light considered for the bonus material in the box? 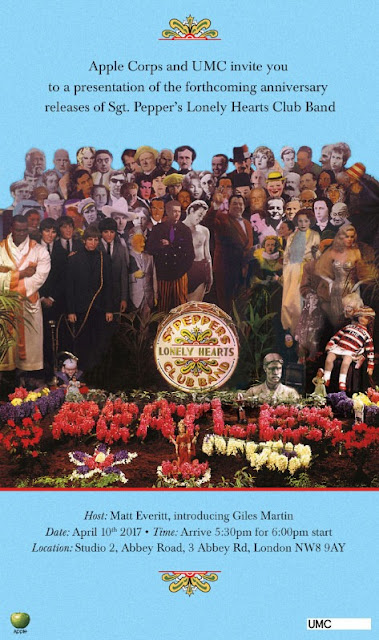