Liverpool plans to celebrate the 60th anniversary of the first, formal meeting of Paul McCartney and John Lennon this summer.

While it's more recently come to light that John and Paul crossed paths before Paul first saw John perform with the Quarrymen on July 6, 1957, it's this meeting that has gone down as their "first," and the one that led John to recruit Paul for his group.

Richard Porter, of London Beatles Walks, posted these details about the anniversary celebration:


On 6 July, 1957, 60 years ago this summer, John Lennon and his band The Quarrymen followed a marching band through the streets of Woolton to play at the annual St. Peter’s Garden Fete. That afternoon he met Paul McCartney and together they went on to change the face of music forever.

This year, on 6 July 2017, 60 years to the day, we will be celebrating the anniversary of The Quarrymen’s performance at the Fete, and the day John met Paul. We will step back in time to replicate the Fete and the Grand Dance at the Church Hall. This will be a community collaboration with the Church and Bishop Martin School where the original Fete took place.

All the elements of a typically English garden fete will be celebrated, including the children’s fancy dress party, the Crowning of the Rose Queen and the procession of The Quarrymen on a flat back lorry through the village. Amongst the many attractions will be games, cake sales, refreshments, and much more and, of course, dancing to the music of The Quarrymen and other artists.

10 years into the future, the 1967 Summer of Love, another marching band was born. 2017 also celebrates the 50thanniversary of Sgt Pepper’s Lonely Hearts Club Band. It’s safe to say that The Beatles may not have happened if it had not been for the 6 July 1957 – the Day John Met Paul.

Please bring your friends along and help us celebrate this historic day, and dress in 1950s style if you want to, be as authentic as you dare! Entry to the event will be by purchase of a programme on the day. You can just walk up and pay; no ticketing in advance is required. Tickets for the Grand Dance in the evening will go on sale, online, sometime in early June, so watch this space. It will be a fabulous day for everyone with Satisfaction is guaranteed!!! 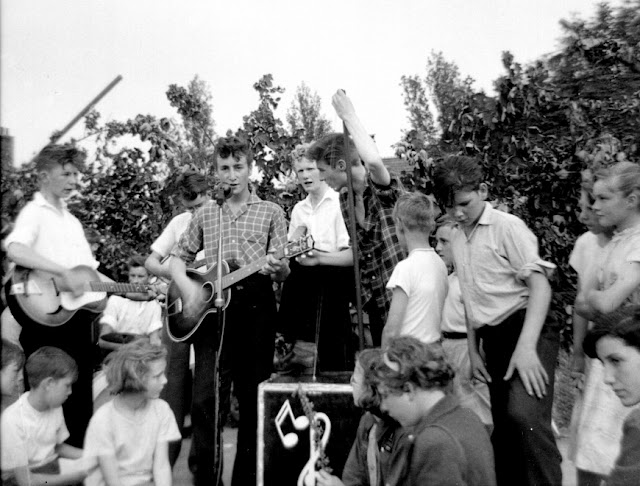