on January 27, 2017
Via the Londonist: Why the hell do people still visit Abbey Road?

Maggie, visiting from Minnesota, agrees with Chris that it really means something to cross this street in suburban north London. "It does," she says, "It's really exciting that they were here at some point." 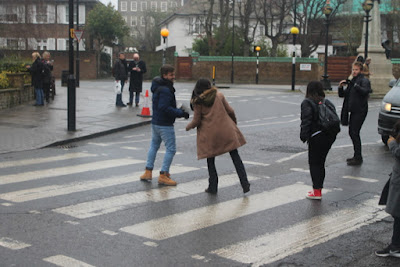 A lengthy article on the Mix website contains a lot of great detail regarding the original filming and sound-recording of the Beatles' first Shea Stadium concert in 1965, along with efforts to restore the sound and film for the recent film "The Beatles Eight Days a Week: The Touring Years."

Unfortunately, in my opinion, non-Shea recordings were used in the restored film that accompanied theatrical presentations of "Eight Days a Week." That practice is mentioned briefly in the Mix article:


The two worked, for the most part, from Bosch’s original 2-track recordings made on the Ampex 350s, though both Fine’s pre-CTS mixes and his final, which includes them, were also available.

Where fixes were required, Martin and Okell took advantage of other Beatles resources that were available to them from Beatles session tapes of the same songs from the Abbey Road tape library, fly­ing in instruments or vocals which otherwise were wholly absent on the raw recordings.

For “Twist and Shout” and “She’s a Woman,” the first two songs, Okell notes, “The vocals are very low, and they’re blended in with the drums; there’s not much we could do about that, besides EQ and trying to dig that out. So we used a bit of the Holly­wood Bowl vocals [from August 30, 1965], in order to bring John up, plus a bit of the rhythm track, where needed. It’s not a total replace, like they did in the film originally. It’s a blend of the two.”

“If we had access to a studio rhythm track, for a couple of numbers, we tried syncing that up and then bring in the low end, maybe the bass and kick drum that wasn’t really present on those kinds of live record­ings,” Okell notes. “And we were very careful about it, it’s done very sub­tly. Nobody would know there’s anything else there—it just makes it sound a bit more full than it would otherwise.”

While the results may look and sound good, the restored Shea film, like "Eight Days a Week" is a flawed product as a documentary. It is fun to watch, but unreliable as a true historical document.

Paul McCartney's manager, in an exclusive conversation with Super Deluxe Edition, explains why Macca's team opted to make some songs in its upcoming Flowers in the Dirt reissue available by download only. Despite many fans being unhappy about the plan, Paul is sticking to it.


The main reason why there is not a fourth physical CD is because Paul didn’t want any more than four discs in the set. What Paul says, ultimately goes. He wants to look to the future and embrace new technology and drive people to streaming. 100m people are signed up to streaming services right now and that is projected to double in the next three to four years. This is seen as the future. Paul’s team want to look to the future and their research shows that more people are excited about the streaming catalogue. If that wasn’t the case then many more box sets would be sold.