The piano John Lennon used when composing A Day in the Life, Lucy in the Sky with Diamonds and other classic tunes is up for auction via Sotheby's, which posted this detailed background on the instrument: 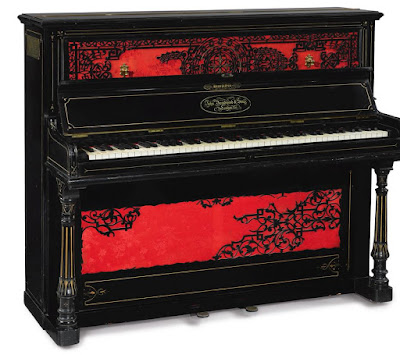 John Lennon's main composing instrument for the Beatles Sgt. Pepper's masterpiece
By 1964 The Beatles were successful enough to have accountants advise on home purchases. The investment potential of possible residences was important and both George Harrison and Ringo chose homes outside of London in the sedate stockbroker belt in Surrey. John Lennon bought the mock-Tudor home Kenwood on the St. George's Hill estate in Weybridge, Surrey in July of that year. Lennon and his then wife Cynthia quickly spent twice the purchase £20,000 price of the home on renovations, including of course, an attic studio for songwriting sessions.

The grounds of over an acre were perfect for the couple's young son Julian and the family remained at Kenwood until John's relationship with Yoko and resulting divorce necessitated the sale of the house in 1968. The four years in which Kenwood was John Lennon's primary residence were the most crucial and productive of the Beatles' career. It was the music he made there, in his studio but just as often in the den on the present instrument, that evolved into his contributions to the Beatles unparalleled catalog including much of the music on Sgt. Pepper's Lonely Hearts Club Band album.

At least two pianos were known to have been in the Kenwood home, but as with many musicians, Lennon preferred some instruments more than others and the Broadwood seems to have been a particular favorite. When he acquired it is unknown, but it was likely in 1966 if not earlier, given it's importance to Lennon's Sgt. Pepper's contributions.

A visit to Kenwood described in the 1967 Beatles Book magazine makes note of the piano as well as Lennon's sometimes eccentric decorating:

"On the ground floor there is a large entrance hall, lined with shelves of books stretching from floor to ceiling. To the right it leads to the kitchen, which is situated in the centre of the house, and to the left to two rooms, one very large, one small. The smaller room contained two pianos, one Broadwood, one Bechstein. The mahogany case of the Bechstein was fast disappearing under a psychedelic design, which was being painted on by two Dutch artists, Simon and Marijke."

This decorated piano, once thought lost, is in fact at George Harrison's Friar Park estate and is highly unlikely to come onto the market.

Much has been made of the significance of Sgt Pepper's Lonely Hearts Club Band, including the overall scheme of the Lennon-McCartney songwriting partnership - for many Beatles scholars it marks the balance of power in the group shifting to McCartney, whose concept of the Edwardian-styled band within a band was the overall conceit of the album. By 1966 the Beatles were tired of touring and Sgt. Pepper's allowed them to become a fully realized studio band, experimenting freely with songs that didn't have to be recreated live and trying to bridge the divide between rock and more traditional music. By the time the sessions were finished in April, 1967 it had taken them 700 hours of recording time and the expenditure of the largest recording budget ever spent up to that date.

The social changes reflected in the album cannot be overlooked;  three of the album's songs that Lennon composed on the present piano were banned by the BBC for drug references. Lennon was adamant (in spite of his and the Beatles own increasing experimentation with drugs) that the songs were not in fact overly influenced by such, "We didn't really shove the LP full of pot and drugs but, I mean, there was an effect. We were more consciously trying to keep it out..."

The origins of the most obvious candidate for pro-drug propaganda, "Lucy in the Sky with Diamonds" was actually based on John's son Julian bringing home to Kenwood a sketch of his classmate Lucy. Once he had showed it to his father, John was inspired to sit at the present piano and begin to compose. When Paul next visited the house he shared his enthusiasm for what he heard and began to contribute parts.

Such was also the case for "A Day in the Life" where Lennon had written two sections of the song, but was having trouble with the middle, which Paul supplied.

In spite of the overwhelming success of the Sgt. Pepper's album, Lennon often expressed the opinion that it was never truly a cohesive concept ("an album with the tracks stuck together.... Nothing is real and there is nothing to get hung about.")
Lennon was certainly careful to note his separate contributions on the affixed plaque before gifting it to a friend:

"On this piano was written: A Day in the Life, Lucy in the Sky with Diamonds, Good Morning, Good Morning, Being for the Benefit of Mr. Kite and many others. John Lennon. 1971"

It is tempting to speculate on the number of additional songs alluded to with John's "many others" wording, but we do know that this upright was important enough to Lennon that after selling Kenwood he had it moved to the new home he purchased with Yoko in 1969, Tittenhurst Park in Berkshire. By 1971, Lennon was permanently in the United States and in 1973 sold Tittenhurst to Ringo Starr along with much of the contents, but not of course the present instrument.

John Broadwood and Sons was founded in 1728 and holds a Royal warrant for the manufacture of pianos beginning with King George II. Mozart, Haydn, Chopin, Beethoven and Liszt are all known to have used the firm's instruments.