Review: "The Zapple Diaries: The Rise and Fall of the Last Beatles Label" 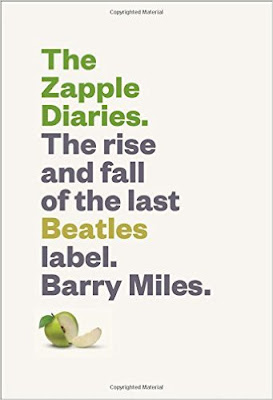 Miles, a friend to the Beatles, particularly to Paul McCartney, was in the late 1960s a book seller and, in his own words, "a purveyor of anything hip" the Beatles thought they should know about. He provided them with books about philosophy, art and politics and turned Paul onto electronic music and free jazz.

Also a fan and friend to members of America's Beat Generation such as William S. Burroughs and Allen Ginsberg, Miles operated the Indica Bookshop and Gallery in London with Peter Asher and John Dunbar. Paul helped paint the shop's interior and even designed its wrapping paper. And it was where John Lennon met Yoko Ono.

All of this made Miles the perfect candidate to manage Zapple, which in the Beatles' view would issue records outside the pop mainstream, such as John and Yoko's experimental sounds and music and George Harrison's album of Moog synthesizer recordings. Miles himself scheduled in a series of recorded "paperbacks" featuring readings and interviews with his literary friends: Ginsberg, Richard Brautigan, Charles Bukowski, Lawrence Ferlinghetti, Michael McClure and Charles Olson.

It was an ambitious and intriguing plan that connected to the Beatles to the Beats and Apple to the underground. In the end, however, Zapple issued only two recordings: John and Yoko's Life with the Lions and George's Electronic Sound. While Miles was in the United States recording his authors, Allen Klein had arrived in London and set about firing people. Zapple was dead and the Beatles wouldn't be around much longer, either.

Miles' book details the demise of Apple and the Beatles from his perspective as a friend and employee, balancing those details with descriptions of his meetings and recording sessions with the various Zapple authors. It's a quick read and engagingly written. How much you enjoy it depends on how far beyond the scope of just-the-Beatles you want to go. The band members aren't central characters in the story, but Miles does include quotes from John, Paul and George dating from interviews he recorded in the late 1960s. And he includes more recent interview material from Paul, from their collaboration on the excellent 1997 McCartney biography, "Many Years from Now."

All this is supplemented with a chronology, rare photos and a bibiography/discography of various writers recorded for Zapple. Many of the sessions Miles recorded were later issued on other labels, ensuring that the Beatles' idea for Zapple and his work wasn't completely lost.

Zapple usually only gets a sentence or two in most Beatles books, so it's nice to get the full story here.