Details on Blu-ray, DVD release of "Eight Days a Week" - No Shea!

Below are the Blu-ray and DVD specs for "The Beatles: Eight Days a Week - The Touring Years," which is now playing in theaters (I'm going tonight!) and streaming on Hulu starting tomorrow.

The details come from Amazon UK, which is listing two-disk and single-disk DVD and Blu-ray versions of the film.

A quick look tells us the restored 1965 Shea Stadium footage, which screens in theaters this week but not on Hulu, won't be included.

This takes a lot of excitement out of these home video packages for me. Sure, there is bonus material but nothing that seems terribly exciting. Plus, I subscribe to Hulu, so I can stream the movie any time there. So, maybe we'll see as a standalone package at some future date, possibly grouped with other decently filmed concerts. But not now. 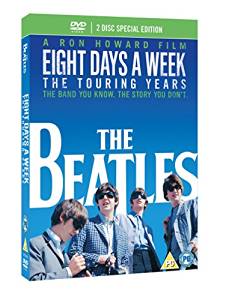 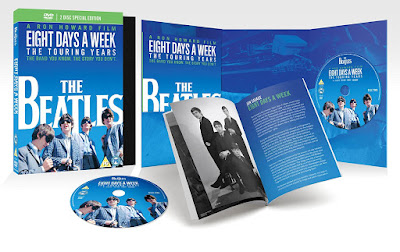 The band stormed Europe in 1963, and, in 1964, they conquered America. Their groundbreaking world tours changed global youth culture forever and, arguably, invented mass entertainment as we know it today. All the while, the group were composing and recording a series of extraordinarily successful singles and albums. However the relentless pressure of such unprecedented fame, that in 1966 became uncontrollable turmoil, led to the decision to stop touring. In the ensuing years The Beatles were then free to focus on a series of albums that changed the face of recorded music.

Master storyteller and Oscar winner, Ron Howard, explores this incredible journey in his own unique way: How did The Beatles do this? How did they cope with all the fame and pressure? How did they not only survive, but go on to revolutionise popular music? With original interviews, footage, staggering live performances, and the intimate study of character that Ron Howard is known for, he puts us right inside this extraordinary adventure, answering the question everyone always wants to know: What was it like to be there?!!

Featuring a wealth of specially created supplementary material totalling 100 minutes of extras, the deluxe home entertainment editions contain exclusively created featurettes for fans to delve even deeper into the band’s world. Accompanying these are stunning, fully restored full length performances of some of the band’s most iconic tracks including “Twist and Shout” and “She Loves You” recorded at the ABC Theatre, Manchester in 1963 and “Can’t Buy Me Love” at the NME Awards, 1964, in London, bringing the experience of seeing The Beatles in concert fully to life for all fans. A full breakdown is included below.