John Lennon vs. Allen Klein legal papers up for sale

The legal papers John Lennon signed to end his management agreement with Allen Klein are now up for sale, with an asking price of $95,000.


In early 1973, the former Beatles decided that they would not be renewing their savvy business manager Allen Klein’s contract when it expired in March. Upon his release, Klein promptly sued The Beatles and Apple in Both New York and London for $19,000,000 (roughly $106,000,000 adjusted for 2016).

On the day that the suit was settled, John Lennon and Yoko Ono, Allen Klein, and a group of the attorneys from both parties assembled in a suite at The Plaza Hotel – and documents were signed by John Lennon and Allen Klein that settled the lawsuit. The mood was actually upbeat and Lennon and Klein were both happy to put this mess behind them. Photographer Bob Gruen was on hand that day and took several photographs, including some shots of John, Yoko and Klein sharing a limo and also posing with the newly signed document resting on a large loaf of bread, signifying that they were ‘breaking bread’ and making peace.

This document was signed on the day that John Lennon and Allen Klein were in The Plaza Hotel to end their feud, thus signifying the resolution of one final bit of business with regard to the dissolution of The Beatles, ironically taking place in the very same building where The Beatles stayed on their first historic visit to New York in February of 1964. 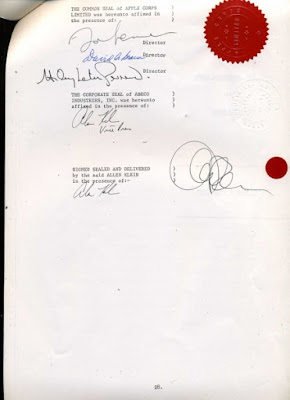