After dropping some hints, Paul McCartney has posted official details about his upcoming festival appearance alongside Bob Dylan, the Rolling Stones, the Who and other classic acts at the Coachella concert site this October:

Empire Polo Club · Indio, California
PASSES ON SALE MONDAY, MAY 9TH
This once-in- a-lifetime concert will take place in Indio, California on October 7, 8 and 9 when six of the world’s most iconic and influential rock and roll artists come together for Desert Trip.

With performances starting after sunset, each artist will play a full set, serving up three incomparable nights of rock ‘n roll. Located at the home of the critically acclaimed Coachella Valley Music and Arts Festival this is the only time and place to see this incredible lineup.

Reserved seats and general admission passes go on sale Monday, May 9th at 10am PT
Ticket prices are as follows:

The weekend will feature an all-star lineup of 30+ world renowned chefs including, Curtis Stone, Michael Mina, Tom Colicio, Michael Voltaggio, Kris Morningstar, Stephen Fretz and 40 of the best restaurants from Los Angeles to New York.  The culinary program will consist of six full-service pop-up restaurants, each featuring its own three-course prix fixe menu. Also included will be the roving culinary adventure known as Outstanding in Field, which features the country's best chefs each night with four course dinner with wine parings from world renowned winemakers.

Stone Brewing's Greg Koch will curate an expansive craft beer program. While Cedd Moses and the Houston Brothers will feature an incredible cocktail experience and Rajat Parr will host an extensive selection of wine tastings. 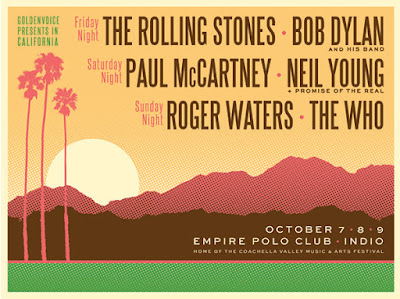