Interesting to note that the tracks aren't sequenced chronologically and, also, there are no outtakes, demos or real obscurities included. Many unheard and rare tracks have turned up on Paul's Archives releases and will likely continue to do so. I'd love to see a whole box of such things and maybe, someday, we will.

In the meantime, though, this looks like a set for casual fans who want to cherry pick Paul's best and best-known tracks and for completists. I'll likely skip it.


Paul McCartney and his music need no introduction. Together with three of his friends, he changed the cultural landscape forever.
And Paul’s accomplishments since then as a member of Wings and a solo artist make for a staggering body of work that stands proudly alongside those eight sensational years with The Beatles.

'Pure McCartney', a new compilation of his solo, Wings and Fireman work, celebrates that fact, showcasing 67 highlights from one of the most-revered catalogues in music - from 'McCartney' in 1970, his debut solo album, right through to 'Hope For The Future', his 2014 track taken from 'Destiny', the most-anticipated video game of the last decade. Not only is 'Pure McCartney’ a monumental mixtape of some of popular music's most memorable moments from 1970 to the present day, it also features curios for the superfans and some of Paul's personal favourites — all handpicked by the man himself..

"Me and my team came up with the idea of putting together a collection of my recordings with nothing else in mind other than having something fun to listen to," Paul says of this project.

"Maybe it's to be enjoyed on a long car journey or an evening at home or at a party with friends? So we got our heads together and came up with these diverse playlists from various periods of my long and winding career.”

As a songwriter Paul has never stood still, dipping his toe in countless genres and styles. 'Pure McCartney' is testament to that fact. From the songwriting masterclass of 'Maybe I'm Amazed' and adventurous, three-songs-in-one of 'Band On The Run' to the irresistible groove of 'Say Say Say' and ahead-of-its-time electronica of 'Temporary Secretary', described by NME when compiling a list of the greatest ever songs as “not so much ahead of its time, but out of it altogether”, 'Pure McCartney' charts the unstoppable adventures of McCartney's unique and eclectic songwriting talents and shines a light on his post-Beatles artistic achievements.

"The word 'career' is a bit misleading because to me it has been more like a musical adventure than a proper job," says Paul, reflecting on the 'Pure McCartney' tracklisting. "It pleases me, and often amazes me, that I've been involved in the writing and recording of so many songs, each of them so different from the others."

Paul's unparalleled career has seen his music break global chart records, win countless awards, fill stadiums around the world and become the soundtrack to millions of people's lives across generations.

Here's a look at the cover, plus links from Amazon. 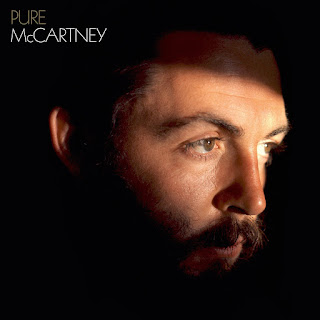