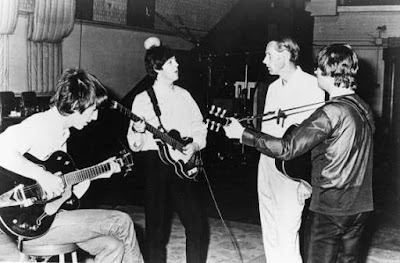 Magnolia Pictures plans a documentary of Harry Benson, who photographed the Beatles on their first trip to the U.S. Benson's work:

Robert Balser, who served as animation director for the "Yellow Submarine" film died at age 88 this week. He also worked on the 1970s Jackson Five cartoon series.

A fan remembers the Beatles' relatively calm performance in Guildford, back in 1963. Includes a vintage review of the show.


“On the night in Guildford the fans were well behaved. I guess we were all frightened if we made too much noise we would have been thrown out. Which is why we were allowed to get the autographs, [it was] more civilised in the early days.” 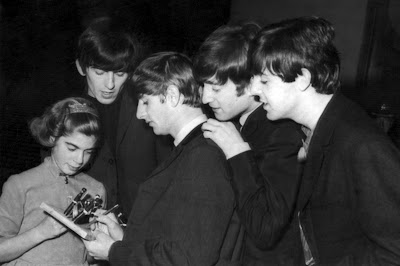 Still changing lives: A British man recounts how singing Beatles songs helped him recover his ability to speak after suffering a stroke.


Four days after my stroke I was lying in bed listening to a Beatles track and found that I could sing along. To the amusement of the ward, I was singing aloud

I Should Have Known Better. There was no effort needed to get the words out.

... So John Lennon and Paul McCartney deserve my thanks. Over the years they have seen me through some good and bad times — but none so important as now.

Now that the Beatles' music is streaming via Spotify, iTunes and other services, media outlets are charting the group's most popular, and least popular tunes, according to listener demand.

You also can see this list of the "10 Most Jewish" Beatles songs.

And this idiotic one about Beatles songs to skip. Seriously?

Former Bee Gees manager Robert Stigwood, who had business dealings with Brian Epstein and the Beatles during the late 1960s, died earlier this week.


In early 1967 Stigwood signed a deal with the Beatles’ manager Brian Epstein, who gave him a minority stake in the company he had founded in 1963, NEMS Enterprises, and an option to buy a majority stake, which would effectively have given him management rights over the Beatles.

When Epstein died of an overdose later that year, however, Stigwood ran into the determined opposition of the group who felt that Epstein had done the deal behind their backs.

When Stigwood visited them when they were filming Magical Mystery Tour, Paul McCartney threatened to record God Save the Queen out of tune on every record the group made from then on if he exercised his option. Sensibly, Stigwood backed off and left NEMS to form his own enterprise, the Robert Stigwood Organisation (RSO).

Amazon temporarily loaded some Beatles-related "Easter eggs" onto its Echo digital assistant device as a way to tease the band's music coming to streaming services.


For instance, Asking Alexa what its (hers?) favorite Beatles song is yields "Tomorrow never knows and neither do I" and "Help, I need somebody to help me choose."

"Alexa, who's your favorite Beatle?" The device responds "I can't decide. We should just let it be". "Alexa, Good Morning". Multiple responses, including "Good morning, here comes the sun. I'm so glad I can play the Beatles for you now."