Bible possibly owned by the real Eleanor Rigby up for auction

A miniature Bible believed to be signed by the real Eleanor Rigby is expected to fetch up to £20,000 at auction in Liverpool, the Daily Mail reports.


As well as Eleanor's signature, the front of the Bible contains a date, February 1899, and a small verse: 'Watch and pray that ye enter not into temptation. God is love'.

The signature of 'E. R. Whitfield' at the back is a reference to Eleanor's full name.

... The Bible is the third item featuring her signature to be put on sale - the others were a payslip from 1911 and a geography school book.

Her payslip, dating from when she worked as a scullery maid when she was 14, used to be owned by Paul McCartney himself, but he donated it to a charity auction, which raised £115,000 from it.

Paul has said he came up with the name "Eleanor Rigby" for his song out of the blue but admits that perhaps he was unconsciously influenced by seeing the real Rigby's headstone in the cemtery at St. Peter's church in the Liverpool suburb of Woolton, where he first saw John Lennon perform with the Quarrymen. 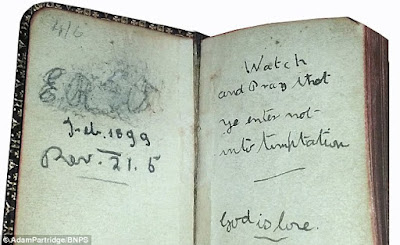