The recent release of the re-mixed, re-mastered Beatles 1 compilation and the Fabs' restored promo films has attracted a lot of media attention over the past week: 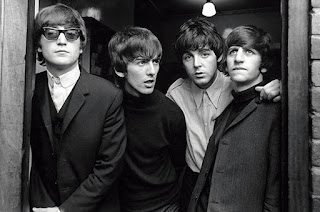 Billboard has a cover interview with Paul McCartney this week focused on the Beatles' number one hits in which Macca shares all his usual anecdotes. He's been asked about all these songs thousands of times and doesn't have much new to say. His remarks on "Help!," however, have been picked up on by numerous other media outlets:


Lennon later said, "I was fat and depressed, and I was crying out for help," though he also masked his misery with the song's chirpy tempo. Adds McCartney, "He didn't say, 'I'm now fat and I'm feeling miserable.' He said, 'When I was younger, so much younger than today.' In other words, he blustered his way through. We all felt the same way. But looking back on it, John was always looking for help. He had [a paranoia] that people died when he was around: His father left home when John was 3, the uncle he lived with died later, then his mother died. I think John's whole life was a cry for help."

That last sentence is classic Paul, making an ill-judged, crude and off-the-cuff statement that proves irresistible bait to the media, who put it directly in their headlines.

Does Paul really think crying for help was John's whole life? Probably not. Just as he likely thought it was more than a "drag" when John was killed. Yet, for a such a generally well-spoken man, he continues to make epic gaffes.

Here's a teaser for the show. If the whole thing shows up on YouTube, we'll share it here.

Speaking of Beatles 1+, Giles Martin tells the BBC about his work remixing the Beatles' top-selling tunes: 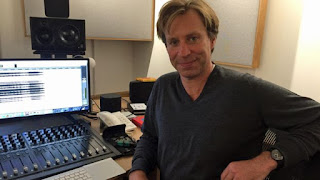 "My dad was never happy with the extreme panning that went on," explains the producer. "You'd have the band on one side and all the vocals on the other.

"And you have what I call the socks and sandals brigade saying: 'The only way to listen to Sgt Pepper's is in mono.' To be honest, they're probably right, but no-one does that any more."

Studio drummer Andy White, who played on drums on the single version of the Beatles' "Love Me Do" because George Martin didn't yet trust the abilities of new drummer Ringo Starr died at age 85 on Nov. 9.

White also played on the record's flip side, "P.S. I Love You" and on a version of "Please Please Me" that appeared on the first volume of the Beatles' Anthology collection. Other recorded performances by the drummer include Lulu's 1964 cover of "Shout" and Tom Jones' 1965 hit "It's Not Unusual." 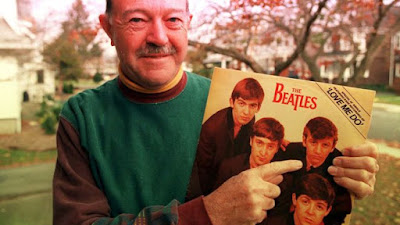 Paul McCartney will headline the 10th annual, and reportedly last, Dine and Disco fundraiser for Britain's Children in Need charity.

The dinner is hosted by the BBC's Chris Evans in a pub the deejay owns in Surrey.

Evans said Macca asked for a modest rider in exchange for performing: “He wants some mineral water ... he’d like some organic dips, and some vegetables and a bowl of fruit.”

All tickets for the June 25, 2016, show were auctioned off shortly after the event was announced, raising more than £2 million. 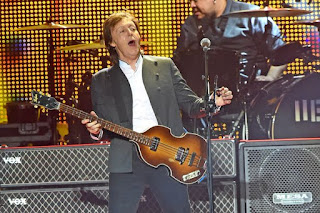 
“My cousin had a pub in Reading, and me and John actually hitch-hiked down there. We were having a little holiday kind of thing and we worked in a bar all week. And John said ‘why don’t you play something, you know, play at a pub one night?’. So we did, we played."

The Jan. 20, 2014, tribute to Ringo Starr hosted by the David Lynch Foundation will be out in CD form Dec. 4 as Ringo Starr: The Lifetime of Peace & Love Tribute Concert.

It's a slight affair, featuring only 10 tracks by Ringo and other artists, but likely of interest to completists. I don't see it listed on Amazon, yet, but here's the lineup: 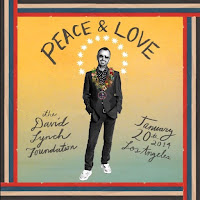 The great New Orleans musician, songwriter and producer Allen Toussaint, who worked with Paul McCartney on the Venus and Mars album, died this week. Paul posted this statement on his Twitter feed. 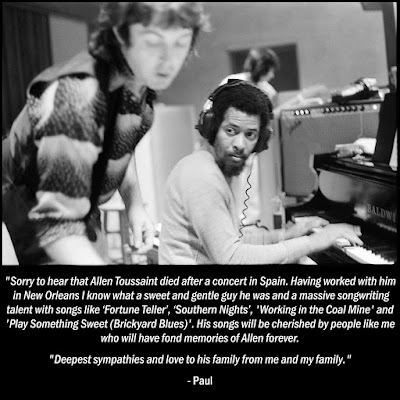 Paul McCartney has donated a signed, specially commissioned rocking horse to an auction that will raise money for the Liverpool-area Alder Hey Children's Hospital.

The former Beatle has modelled the wooden creation in the likeness of his own Appaloosa horse and signed it ‘rocking horse people eat marshmallow pies’ in homage to John Lennon’s trippy 1969 hit.

The toy, made by tradesman Stevenson Brothers, will go under hammer to raise money for the children’s hospital where Sir Paul believes his own mum briefly worked.

The poster John Lennon and Paul McCartney created for 1967's Monterey Pop Festival was sold for $175,000 by Rockaway Records in Los Angeles. 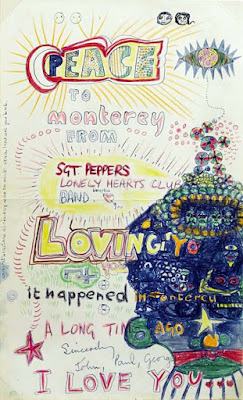 Beatles publicist Derek Taylor was assisting in the promotion of Monterey Pop and helped facilitate the contribution from the Beatles, who had been invited to perform at the show. But the group had stopped touring just six months before being asked in February 1967 to come up with something to help generate excitement for the new festival.

Lennon and McCartney’s artwork was reprinted in the official program for Monterey Pop — on page 16.

Also sold at auction this past week: John Lennon's long lost and recently recovered Gibson jumbo acoustic guitar (for $2.4 million) and the Beatles' bass drum head seen on "The Ed Sullivan Show" in 1964 (for $2.125 million to Indianapolis Colts own Jim Irsay). 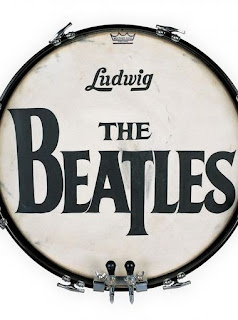 Copper "bum molds" have been installed on a Plymouth, England, hillside to mark where the Beatles sat in a famous photo taken during production of "The Magical Mystery Tour" film.

The actual bums of the Beatles weren't cast for the project, which made use of the bums of tribute band the Fab Beatles instead.


Each member of the band was lowered into a sand pit to create an initial impression. Concrete was then poured in to create the moulds.

These shaped the copper that has been used to create the artwork. The finished piece will feature a textured design with motifs inspired by the 1960s. 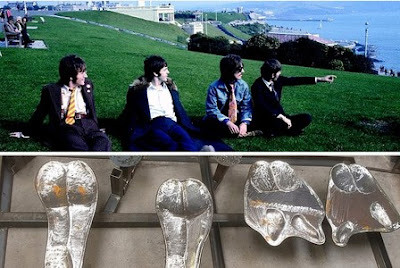