On the heels of a CD release of these interviews: 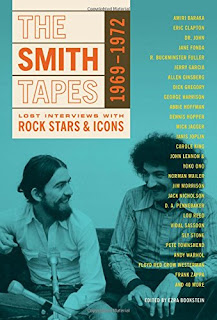 The 1960s were a period of radical cultural, social, and political upheaval in the United States and around the globe; yet in just three years, between 1969 and 1972, Village Voice "Scenes" columnist, WPLJ FM radio host, and cult figure Howard Smith got to the heart of it all by talking it out—both on and—off the record. As famous as those who passed through the airwaves, Smith encapsulated the end of an era through personal conversations and hard-hitting interviews with Mick Jagger, Frank Zappa, Andy Warhol, Buckminster Fuller, leaders of the feminist movement and the Gay Liberation Front, a NARC agent, John Lennon and Yoko Ono, and scores of other iconic and influential personalities, including musicians, artists, filmmakers, actors, writers, politicians, and social activists, from countercultural luminaries to everyday revolutionaries and everyone in between.

The Smith Tapes transcribes, for the first time ever, sixty-one of those recorded sessions, from an archive of more than one hundred fifty reels unearthed after more than forty years. Edited by documentary film writer and director/producer Ezra Bookstein, this book reveals the time capsule that Smith ingeniously captured, and contains raw and unscripted talks that take you right into the midst of a transformative cultural and musical explosion.