After that mysterious countdown video, the Beatles' official site has posted details about the expected new release: New editions of The Beatles' 1 album with videos of all the songs, including restored versions of the promo films the group made in the 1960s.

Just to keep you confused, there are several different editions and formats available. All are out Nov. 6.

The variations include a: 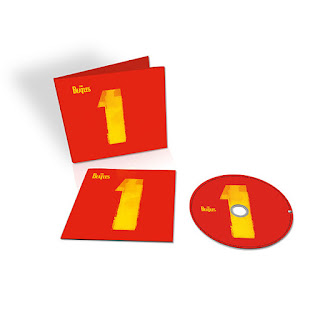 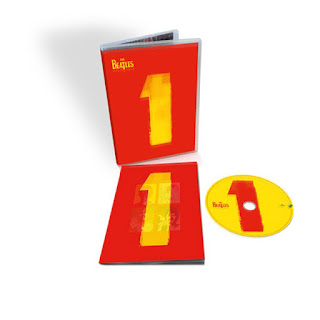 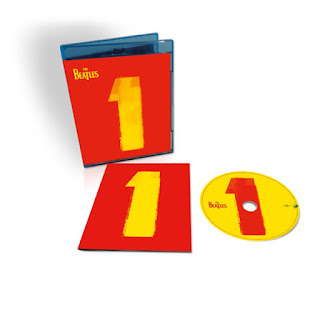 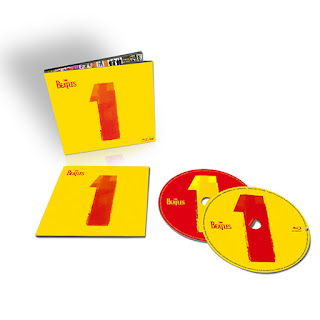 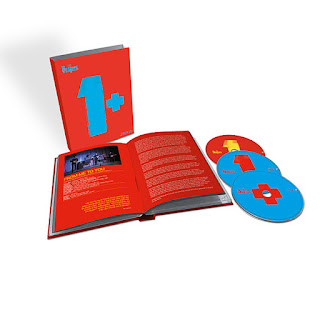 London – September 15, 2015 After The Beatles stopped touring, and because traveling around the globe to promote new releases was impossible, the band increasingly made what could be described as “mini movies”.

These pioneering promotional films and videos helped to define the way we have come to watch music, not least because The Beatles approached filming with the same ease and innovative spirit they brought to the recording studio, exploring new creative possibilities with infectious delight.

Showcasing the band’s filmed work to accompany their 27 No.1, U.K. and U.S. singles, The Beatles 1 is newly restored and expanded in multiple configurations for global release on November 6 by Apple Corps Ltd/UMG.

The brand new Beatles 1+ celebrates their career in over 200 minutes through 50 promotional films and videos. This includes the 27 No.1s, with the restored videos, along with a second disc of 23 videos, including alternate versions, as well as rarely seen and newly restored films and videos; all include new audio mixes in deluxe CD/2-DVD and CD/2-Blu-ray packages. The 27-track audio CD is also being made available with new stereo mixes.

The new editions of The Beatles 1 have been made possible following extensive research, and restoration of the original promo films, classic television appearances and other carefully selected videos spanning the band’s history. Apple Corps dug deep into The Beatles’ vaults to select a broad range of films and videos for their rarity, historical significance and quality of performance.

An 18-person team of film and video technicians and restoration artists was assembled by Apple Corps to undertake painstaking frame-by-frame cleaning, colour-grading, digital enhancement and new edits that took months of dedicated, ‘round-the-clock work to accomplish.

The result is a visual rundown of The Beatles’ number one records, as well as the additional tracks on the bonus disc of Beatles 1+ that show the band in previously unseen standards of clarity and quality; many of the films and videos have never before been commercially released, in whole or in part.

Beatles 1 and Beatles 1+ offers the restored films, including 35mm negatives scanned in 4K and digitally restored with new stereo and 5.1 surround audio remixes, produced from the original analogue tapes by the GRAMMY winning team of Giles Martin with Sam Okell at Abbey Road Studios.

For four of the videos, Paul McCartney and Ringo Starr have provided exclusive audio commentary and filmed introductions, respectively.

The 1+ Deluxe Edition, presented in an expanded 124-page illustrated hardcover book includes ‘an appreciation’ of The Beatles’ ground-breaking films and videos by music journalist and author Mark Ellen and extensive, detailed track/video annotation by music historian and author Richard Havers.

“These videos and films are spectacular reminders of the era we lived in. They also rock!” Paul McCartney

“I think it’s really interesting to see the videos we made, some of them incredible and some of them really incredible. How else would we have got to sit on a horse?” Ringo Starr

Between 1962 and 1970, The Beatles released 27 No.1 hit singles in the U.S. and the U.K.  In 2000, these timeless songs were collected for The Beatles 1, which topped the charts in 35 countries and became that decade’s bestselling album worldwide. 15 years later, 1 is revisited for this entirely new, visually-inspired presentation. It’s The Beatles, as you’ve never seen them before.

1. LOVE ME DO Newly edited clip, featuring material from BBC TV’s The Mersey Sound, with performance footage filmed on 27 August 1963 at the Little Theatre, Southport.

2. FROM ME TO YOU A live performance at the 1963 Royal Variety Show, filmed at The Prince Of Wales Theatre, London, on 4 November 1963.

3. SHE LOVES YOU A live performance from the Swedish Television show Drop In, recorded on 30 October 1963 during a short Scandinavian tour.

4. I WANT TO HOLD YOUR HAND From the Granada TV programme Late Scene Extra filmed on 25 November 1963.

5. CAN’T BUY ME LOVE First broadcast in the TV show Around The Beatles, filmed on 28 April 1964 and broadcast the following month. It features a different audio track to that of hit single, recorded by The Beatles on 19 April 1964.

6. A HARD DAY’S NIGHT Live performance at the Palais des Sports, Paris on 20 June 1965, while on a short European tour.

7. I FEEL FINE Filmed at Twickenham Film Studios on 23 November 1965. One of ten films shot that day to satisfy global TV demand for broadcast material to accompany The Beatles’ hit records.

8. EIGHT DAYS A WEEK A brand new clip edited from material filmed at the Shea Stadium concert in New York City on 15 August 1965, during which the band performed twelve songs, but ‘Eight Days A Week’ was not among them. The clip says so much about the band’s frenetic lifestyle in 1965, at the height of Beatlemania.

9. TICKET TO RIDE Filmed at Twickenham Film Studios on 23 November 1965.

10. HELP! The less frequently seen clip of those filmed at Twickenham Film Studios on 23 November 1965.

11. YESTERDAY Paul performing on The Ed Sullivan Show, videotaped in New York City on 14 August 1965 and broadcast the following month, the day before the single was released in America.

12. DAY TRIPPER Three versions of this clip were filmed at Twickenham Film Studios on 23 November 1965. This is version 2, in which all of the group are wearing polo neck sweaters, except for Paul, who wears a black shirt.

13. WE CAN WORK IT OUT There were three versions of the ‘We Can Work It Out’ video filmed atat Twickenham Film Studios on 23 November 1965. This is version 2 in which all four Beatles are wearing black polo neck sweaters.

16. ELEANOR RIGBY This clip is taken directly from the Yellow Submarine movie.

17. PENNY LANE A ground-breaking clip by Swedish director Peter Goldmann that captures The Beatles in Stratford, London, and at Knole Park in Kent, with additional material shot in Liverpool.

18. ALL YOU NEED IS LOVE Filmed in Studio One at Abbey Road, on 25 June 1967, and beamed around the globe as a part of the TV programme Our World. This colourised version was created for The Beatles Anthology TV programme in 1995.

19. HELLO, GOODBYE London’s Saville Theatre was the location for this promo film, shot on 10 November 1967; The Beatles wear their Sgt. Pepper outfits.

20. LADY MADONNA Just prior to leaving for India, The Beatles met up in Studio Three at Abbey Road, on 11 February 1968. They were filmed while recording ‘Hey Bulldog’.

21. HEY JUDE Filmed at Twickenham Film Studios on 4 September, for broadcast on David Frost’s TV show, Frost On Sunday. The introduction by David Frost is different from that on disc 2.

22. GET BACK The promo clip made available at the time of the original release of the single featured performances from the Apple rooftop synched to the record. This new clip has been rebuilt to replicate the original but with improved picture quality.

23. THE BALLAD OF JOHN AND YOKO This original promo clip features outtakes from the Let It Be movie, with other private footage shot in Amsterdam, London, Paris and Vienna.

24. SOMETHING The video features George and Pattie, John and Yoko, Paul and Linda, and Ringo and Maureen. and was filmed at locations in Berkshire, Surrey, and the Mull of Kintyre.

25. COME TOGETHER The clip was created in 2000 by Melon Dezign for the launch of thebeatles.com and the original Beatles 1 album.

26. LET IT BE A 1970 promo clip was made available to support the release of the single and it was different to the one featured in the Let It Be movie; this clip has been rebuilt from the original footage.

27. THE LONG AND WINDING ROAD This clip is taken straight from the Let It Be movie.

1. TWIST AND SHOUT From the Granada Television programme Scene At 6.30, which was videotaped on 14 August 1963.

2. BABY IT’S YOU One of two clips used to promote the single taken from the 1995 Live At The BBC album. The clip is enhanced by the inclusion of unique colour footage of The Beatles filmed outside the BBC’s Paris Studio on Lower Regent Street, London.

3. WORDS OF LOVE When On Air – Live At The BBC Volume 2 was released in 2013, it included ‘Words Of Love’, a Buddy Holly composition that the band recorded for radio. This new clip is a mix of existing footage and innovative animation.

4. PLEASE PLEASE ME A live performance videotaped on 9 February for The Ed Sullivan Show, which was screened on 23 February 1964.

5. I FEEL FINE Filmed at Twickenham Film Studios on 23 November 1965, this clip shows The Beatles eating fish and chips during their lunch break.

6. DAY TRIPPER From the TV special The Music Of Lennon & McCartney that first broadcast in mid-December 1965.

7. DAY TRIPPER Filmed at Twickenham Film Studios on 23 November 1965, with the group wearing their Shea Stadium Jackets with the ‘Nehru’ collars.

8. WE CAN WORK IT OUT Filmed at Twickenham Film Studios on 23 November 1965 – showing The Beatles wearing the Shea Stadium jackets.

9. PAPERBACK WRITER Shot on videotape at Abbey Road, on 19 May 1966, this studio version is prefaced by a short introduction by Ringo. It was broadcast on The Ed Sullivan Show in America.

11. RAIN This black and white clip is a new edit from several takes of ‘Rain’ videotaped at Abbey Road on 19 May 1966.

12. STRAWBERRY FIELDS FOREVER Directed by Peter Goldmann and with newly restored footage, this was filmed at Knole Park, Kent on 30 and 31 January 1967.

13. WITHIN YOU WITHOUT YOU/TOMORROW NEVER KNOWS The merging of these two tracks, one from Sgt Pepper’s Lonely Hearts Club Band, the other from Revolver, was created for The Beatles Love show by Cirque du Soleil, which opened in June 2006 in Las Vegas. This video was created to promote the Love album released later that year.

14. A DAY IN THE LIFE Filmed in Studio One at Abbey Road on 10 February 1967, this includes classical musicians, who were asked to wear evening dress, fake noses and funny hats for the recording session.

15. HELLO, GOODBYE This clip is another shot at London’s Saville Theatre on 10 November 1967; The Beatles wear their ‘street clothes’.

16. HELLO, GOODBYE This third version was also shot at London’s Saville Theatre on 10 November 1967; it includes elements from the first two films but with additional footage unique to this edit.

17. HEY BULLDOG The original footage from a 1968 shoot for the ‘Lady Madonna’ promo film was unearthed in the mid-1990s. It was revealed that The Beatles were recording ‘Hey Bulldog’ and is an edit done to promote the reissue of the Yellow Submarine movie in 1999.

18. HEY JUDE This is an edit of the two other takes filmed on 4 September 1968 for the Frost On Sunday TV show. This has a different David Frost intro to the clip on disc 1.

19. REVOLUTION One of two versions, this was shot the same day as ‘Hey Jude’. John’s lead vocal is completely live, as are most of Paul and George’s backing vocals. The instrumentation, including Nicky Hopkins’ electric piano, is from the master tape.

20. GET BACK This clip was assembled in 2003 to support the release of the album Let It Be…Naked and utilises studio footage from the famous Get Back/Let It Be sessions.

21. DON’T LET ME DOWN This was the B-side of ‘Get Back’ and this clip is a composite of two live performances from the Apple rooftop in 1969. It was made available to support the release of Let It Be…Naked in 2003.

22. FREE AS A BIRD The 1995 video is a work of art by director Joe Pytka, who used the concept of a bird’s-eye view to pay homage to many Beatles songs and images.

23. REAL LOVE Directed by Geoff Wonfor and ex-10cc and leading pop promo-maker Kevin Godley, this video was made in 1996 to support the release of the single. About The Trailer The Blu-ray/DVD The Restoration Pre-Order Restored. Rare. Remixed. The Beatles As You've Never Seen Them Before.