on July 06, 2015
Authored by Beatles/Liverpool scholar Michael Brocken, this is listed only as a very expensive e-book at Amazon ($100+). 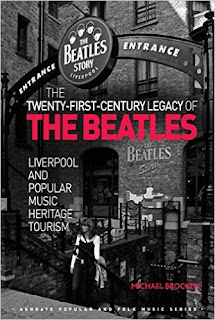 It has taken Liverpool almost half a century to come to terms with the musical, cultural and now economic legacy of the Beatles and popular music.

At times the group was negatively associated with sex and drugs images surrounding rock music: deemed unacceptable by the city fathers, and unworthy of their support. Liverpudlian musicians believe that the musical legacy of the Beatles can be a burden, especially when the British music industry continues to brand the latest (white) male group to emerge from Liverpool as ‘the next Beatles’.

Furthermore, Liverpudlians of perhaps differing ethnicities find images of ‘four white boys with guitars and drums’ not only problematic in a ‘musical roots’ sense, but for them culturally devoid of meaning and musically generic.

The musical and cultural legacy of the Beatles remains complex. In a post-industrial setting in which both popular and traditional heritage tourism have emerged as providers of regular employment on Merseyside, major players in what might be described as a Beatles music tourism industry have constructed new interpretations of the past and placed these in such an order as to re-confirm, re-create and re-work the city as a symbolic place that both authentically and contextually represents the Beatles.