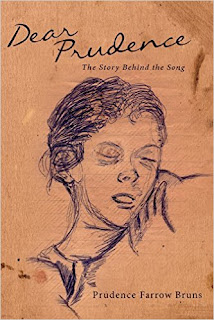 “The sun is up, the sky is blue, it’s beautiful, and so are you…”
Those simple lines from the Beatles’ ballad, “Dear Prudence,” are easily recognizable by anyone who lived through the 1960s, as well as by the millions of people who continue to enjoy the Beatles’ music today.

But who was Prudence? Did she ever come out into the sunshine and greet the new day, as John Lennon beseeched her to do? What’s the real story behind the song?

Prudence Farrow Bruns, a daughter of the prominent Farrow family that includes sister and actress Mia Farrow, finally sets the story straight. Her memoir speaks to her three-month self-imposed meditative seclusion in India in 1968, while also carefully examining the universal experience of the 1960s youth movement.

Farrow honestly and unflinchingly explores how music, drugs, the Vietnam War, and eastern mysticism and philosophy changed millions of young people’s worldviews during one of America’s most tumultuous decades. She also touches on her own famous family’s heartaches and triumphs, even as she voices the experiences of an entire generation through a single iconic song.