New Beatlefan is out! See my book reviews!

The new issue of Beatlefan is available.

Pick it up to see my review of Ivor Davis' "The Beatles and Me on Tour" and Luca Perrassi's "Paul McCartney Recording Sessions: 1963-2013." 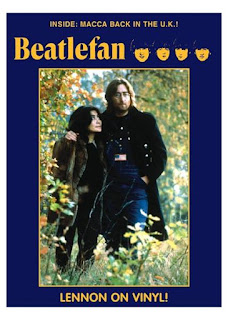 The new issue of Beatlefan (#214) marks the reissue of John Lennon's album catalog on vinyl with a special cover package of articles. Included are Tom Frangione's consumer's guide to the albums included in the "Lennon" box plus a wrapup of his avant garde, live and compilation sets; Robert Rodriguez's look at the making of "Instant Karma," the single that proved to Lennon he could have success outside The Beatles; and Jeff Slate's review of what's good and bad about the new "Lennon" box set.


This issue also features coverage of Paul McCartney's recent U.K. tour by London Editor Simon Rogers and Senior Editor (and chief Fan on the Run) Rick Glover, who also looks back 25 years at the Paul McCartney World Tour, with photos by Jorie Gracen. Also in the new issue, Bruce Spizer goes back 50 years to tell the story of the "Beatles VI" album and Brad Hundt writes about the Beatles reunion-that-never-was from a second-generation fan's viewpoint. Plus, you'll find several pages of reviews and all the latest news, including an in-depth report on Ringo Starr's induction by Paul into the Rock and Roll Hall of Fame!

A sample issue costs $8 in the U.S. or $11 abroad. U.S. funds only. If you want the latest issue, be sure to specify #214. For more information, email goodypress@gmail.com. Send to P.O. Box 33515, Decatur GA 30033. A year's subscription in the U.S. costs $33 for six issues or $37.50 if sent First Class Mail in an envelope. Canadian subscriptions cost $43 per year and for Mexico the cost is $50. International subscriptions to all other countries around the globe are $56 (sent Air Mail) U.S. funds only. CREDIT CARDS AND PAYPAL ACCEPTED (goodypress@mindspring.com). For credit card orders, you can call 404-713-6432 or e-mail goodypress@gmail.com.