One of John Lennon's gray, collarless Beatles suits up for auction, as is a banjolele owned by Liverpool star George Formby and, later, George Harrison.


...Lennon's mohair suit is on a buy it now offer valued at £100,000. The suit with black rope piping to the collar was first donated to Madam Tussaud's in 1964 by Brian Epstein. On April 29th 1964, The Beatles themselves attended the unveiling of the wax figures wearing the suits. The suit bears the name D, Millings of 41 Great Poultney Street London with John handwritten on the label.

The CIA won't "confirm or deny" they kept a file on Cynthia Lennon. It's well-documented the FBI spied on John for years.

The average 40-year-old Brit likes Queen more than the Beatles and dogs more than cats. No accounting for taste, I suppose.

Julie Harris, who designed the Beatles' clothes in both "A Hard Day's Night" and "Help!" died this week at age 94.


In 1965, after working with the Beatles, she said: "I must be one of the few people who can claim they have seen John, Paul, George and Ringo naked." 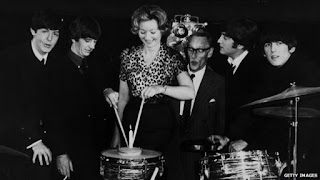 
Paul tells the Daily Mirror why he stopped smoking dope and how he stays fit. Important stuff. Also, he does a 5-minute handstand.


“I feel pretty fit,” he says, still upside down with his back towards me. “I’m not the sort of person who particularly needs a trainer. I’ll just watch what the trainers do and then copy them.

“I do a bit of the cross-trainer, a bit of running, a bit of cardio and then I do some weights, some abs on the Swiss ball, before ending up on the mat doing a few stretches. And then standing on my head.

“That’s my big claim to fame! I ­actually learned it in the 60s, it was a yoga thing, and my argument is I need flexibility not strength.

“But what’s cool about it is that I’ll be in the gym with all these guys doing really big weights, whilst I’m there doing not big weights, and afterwards, when I’ve done my headstand for about five minutes, these big guys will come up to me and say, ‘That was pretty impressive, man!” 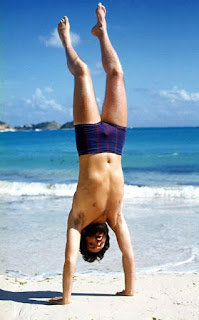