The Daily Mail has published a typically sensational story featuring a previously unseen pictures of George Harrison, John Lennon and Ringo Starr - but not Paul McCartney - gathering at Harrison's house in 1968. 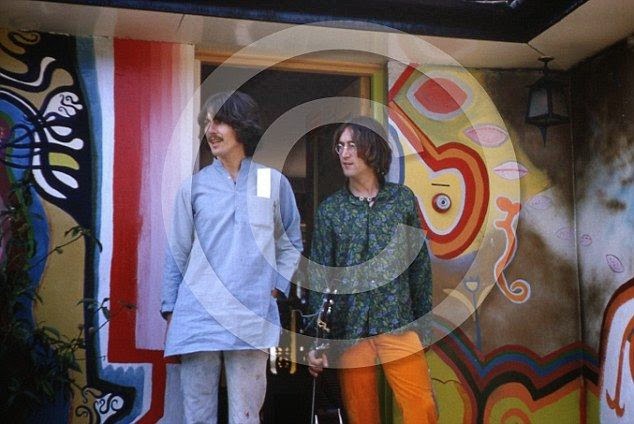 The photographer, Michael Herring, was 19 at the time and turned up at Lennon's home:


‘John opened the door and said exactly these words: “Well then, what’s it about?”,’ he recalled.

Mr Herring said he won Lennon over by joking: ‘John, I wish you could be me so that you know what it feels like to meet you.’ He was promptly invited in for breakfast.

...They jumped into Lennon’s Mini and drove to Harrison’s Surrey bungalow, Kinfauns – adorned with psychedelic murals – to find George sitting on his lawn, playing the guitar.

....It was here that Mr Herring captured his series of evocative images.

Ringo arrived at the home a short time later. The Beatles were gathering to record tracks, which later surfaced on bootlegs and the Beatles Anthology compilation, for "The White Album." But Paul didn't turn up at the session Herring attended.

Instead, Herring tells the Mail, a man arrived with a letter for George, which Herring claims was from Paul's attorneys, the father and brother of Linda Eastman, later Linda McCartney. The letter reportedly stated Paul wanted to quit the band.

George is depicted in one of the photos with a white paper sticking out of his shirt pocket.

However, Beatles biographers Mark Lewisohn and Hunter Davies told the Mail they both doubt the claim about the letter.


‘There’s no way that can be accurate because the Eastmans had no part in Paul’s life until his relationship with Linda began in October 1968, and there was no way Paul was quitting at this point.

They had a number of sessions at George’s house and Paul was certainly at most of them – maybe not this one – because we have the recordings.’

But he added: ‘This does not undermine the general story, which I do believe.'


The photos look genuine – that is George’s house, so I believe he was there that day.

But I am not sure about the letter from Paul which allegedly says he is quitting.
That would have been a dramatic moment in pop music history.

In 1968, the Beatles were beginning to have tiffs and fallings out, but they were still working and composing together – and did so for at least another year.

Omega Auctions has reportedly contacted Herring about including the photos in its next Beatles auction later this month.
at March 07, 2015