The Journal i.e. website has published a photo of a young George Harrison snapped by a Dublin street photographer in 1950.

George, 7, is a shown with his mother, Louise, and older brother, Pete. The family was likely in the city visiting some of their Irish cousins.


The photo was taken by Arthur Fields — a Jewish-Ukranian street photographer who became a Dublin institution; it’s estimated he took over 180,000 images on and around O’Connell Bridge during his career before he retired in 1984.

...A documentary on Fields career is currently being produced by Dublin-based ‘El Zorrero Films’. Project director Ciaran Deeney told TheJournal.ie that they were currently in the middle of the shoot, and they had tracked down “dozens” of stories about the photographer since securing funding earlier this year as part of the ‘Arthur Guinness Projects’ programme.

Deeney is hoping to generate funds for his film by selling limited edition prints of Fields' works here. 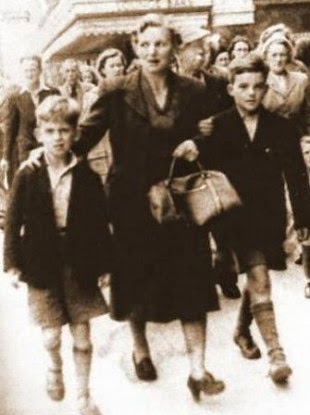